People do not trigger glide cracks.

Over 9 out of 10 off-piste accidents occur due to victims triggering the avalanche themselves. This usually happens because they weren’t applying basic accident reduction measures at the time of the accident despite clear signs of danger. According to experts, one clear sign of danger that many victims did not take into account is ‘recent avalanche activity’ … as a clue of instability. The clue of ‘recent avalanche activity’ is recent cold, dry slab avalanches. This is the type of avalanche that’s involved with almost all avalanche accidents. Therefore this is where attention should be directed for effective accident reduction actions. 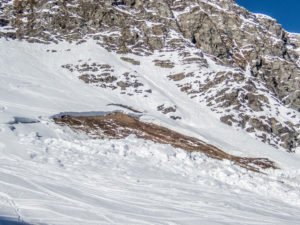 One thing I’ve often noticed when chatting to other off-piste skiers is a deep myth/misunderstanding about glide cracks, sometimes called ‘brown frowns’.

Despite speculation, conversation and rumours – even in avalanche forecasting bulletins – there is no confirmation by the scientific community of a person ever triggering an avalanche from a glide crack any where in the world. There are confirmations from numerous professionals who have found it almost impossible to trigger them even with explosives. One reason for this is because, unlike slab avalanches, glide cracks contain no significant weak layer except for the interface at the bottom of the snowpack and the ground surface. Thus, glide cracks are not considered “recent avalanche activity” for off-piste skiers and ski tourers in snow stability evaluation regarding the risk of cold, dry slab avalanches because they are not a clue of general instability in the snowpack that could lead to an accident.

On the contrary, glide cracks are actually an indication of  general snowpack stability during winter conditions when most accidents happen. This may seem counter-intuitive, and many people have resisted this fact.

Comparatively little research has been done into glide cracks and the relatively rare full-depth avalanches that may release from the fissures (relatively rare compared to slab avalanches).

If a glide crack does release into an avalanche, it looks like a slab avalanche, as both occur as linear fractures. However, glide crack avalanches are very different in nature because of the composition of the snowpack:

The releases of glide cracks are very unpredictable, and almost always occur naturally. Unsurprisingly, they’re a nightmare for ski resort and road safety authorities when they hang over a piste or road that needs to be opened! See this article on a new novel technique that uses flooding glide cracks with dozens of tons of water in order to get them to release by the Val d’Isère Piste Patrol

Although they’re not much of a threat to the off-piste skier who’s just quickly traversing under them, you certainly wouldn’t want to hang around there. Graham Predeger, Chugach National Forest Avalanche Information Center, SE Alaska, recommends: ‘Glide cracks are best given a wide berth. Limit your exposure time underneath and if skiing or riding in terrain with glide cracks, try and map them out first as not to end up directly on top of or inside one’. See “Don’t Mess with the Brown Frown” by Aleph Johnston-Bloom (The Avalanche Review, April 2016). 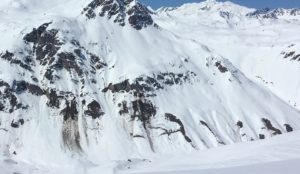 A number of glide cracks across a steep slope

While glide cracks used to mainly be a spring-time phenomenon, they now seem to be appearing earlier and earlier in the season. For example, in January 2016, Chugach National Forest witnessed an unusually active spate of glide cracks appearing on slopes facing virtually every direction. This followed a warm storm pattern that had deposited over 4 m of snow in a very short timescale (glad cracks often form after a lot of snow has come down and stabilized).

To sum up, the problem with glide cracks is that:

In sum, for the off-piste skier and ski tourer:

Here is a quick summary that Alec Vanherwijnen from the SLF snow and avalanche science center in Davos provided for me after some long discussions on the subject. His conclusions here are based on a current study – they are approximations.

You statement about glide cracks being associated with snowpack stability is valid, but only in winter. In spring, the presence of glide cracks suggests that wet-snow avalanches are also possible.
—-

Content in this article is also thanks to these two articles: ‘Retour d’Observations sur les Plaques de Reptation’ by Damien Margueritat in the ANENA.org publication, Neige et Avalanches, No 152, February 2016, and ‘Don’t Mess with the Brown Frown’ by Aleph Johnston-Bloom in the AAA publication, The Avalanche Review, April 2016.

Also, why not also come along and find out more at our ORTOVOX Off-Piste Awareness Tour starting in November and running ‘virtually’ all season long!

We can do private talks for you and your group too.

Email hat@henrysavalanchetalk.com for more details on any of the above.