Risk of avalanche is high or very high on Tuesday

There have been two avalanche accidents in Italy in the past 3 days.  See reports here and here.  Meteo France have just issued the bulletin click here and warning for Tuesday 7th March.  The danger rating is forecast to be level 4.

Judging by the continuing snowfall and wind in the resort this evening, the resort could choose to increase the rating to level 5.  they will decide that in the morning, so pay attention to resort notices and radio Val d’Isere.  If this happens you will see a black flag.

Here is a translation of the bulletin

The layer of fresh or recent snow that has been thickening since last Tuesday has some large accumulations on the leeward slopes and breakable or hard patches formed by strong winds from SW to NW especially in high mountains. In the valleys we have seen a stormy wind of SE Foehn. The strong west wind at NW and the ongoing snowfall will form more wind slab. With natural precipitation, wind and

In the high mountain with natural precipitation, wind and sun, natural avalanches will occur, sometimes heavy (especially on downwind leeward slopes), powdery, or friable or harder slabs.  or wetter snow, Below 1800 m and higher on sunny slopes (a high mountain road can be reached). The risk of triggering one when a skier passes remains important.

Below 1800 m and higher on sunny slopes we can expect wetter slides that could reach a high mountain road. The risk of triggering one when a skier passes remains important.

The risk of triggering an avalanche is high even with just one skier.  At risk 4 it is possible for a skier to trigger an avalanche on a steep slope even when they are some distance from the steep slope.  This risk is present on all slope aspects

and listen to Henry describe it on this link 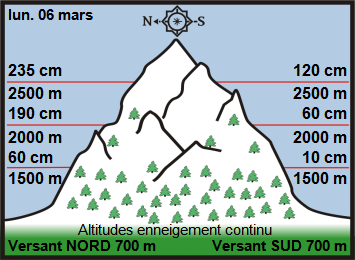 The fresh snow that fell since last Saturday (40-50 cm to 1900 m), is more or less wet on the surface below 1600 m, or powdery higher. It is more or less deep, and compacted or hardened by the wind. The wind has moved the snow around a lot, especially in high mountains. It rests on a good layer of recent snow, moistened below 1500 m on North slopes, and higher in sunny slopes SE to SW. The oldest snow (which has weakness) remains above 1100 m on the North slopes, 1900 m in the South.

Anticipate delayed openings whilst the piste patrol secure the mountain.  The wind has been from SW to NW so the wind slabs will be on NE to SE slopes. A lot of the snow will be wind affected and this could be hard to ski in.  Initially the fun will be on the piste with fresh snow. The most fun will be found off piste in sheltered spots, particularly if it is East facing. Stay exclusively on slopes below 30 degrees.  Stay at least 300m away from any slope that is 30 degrees or steeper.

If you see people going on steeper slopes and nothing happens, that does not mean it is safe. A slope that has the potential to release will not release 95% of the time.  You do not want to be testing the validity of this statistic and becoming a victim of the 5%.

If the danger rating goes up to 5, stay on any pistes that are open, do not go off piste.