Lessons from the Tignes avalanche accident

We don’t have a full picture from the investigation as yet. But it is possible to identify some lessons that we can learn based on what we do know about the Tignes avalanche accident.

This post makes no comment about the decisions and actions of the victims as we do not know anything about their discussions and consideration.  We do know they were fully equipped to go off piste. The official investigation will cover that.

This post is to help everyone who goes off piste to make better decisions on how to stay safe.  It is also to encourage skiers that it is still possible to stay safe and have fun off piste.

A description of the avalanche

This Tignes avalanche was big. The avalanche released at an altitude of 2460m just under the cliffs and rocks at the top of the Lavachet wall See data avalanche for details (and photo below).  The crown break was 100m wide and 40cm deep.  The slide travelled a distance of 1150m which involved 400m vertical descent.  We do not have accurate information on the depth of the snow that piled up at the bottom, but we heard reports of rescuers probing 6-8m depths in the search. (see photo below).

We do not know how far up or down the slope the victims were when they triggered the avalanche. However the topography means must have been lower down the slope than where the crown actually broke.  The avalanche was triggered by the victims’ weight on the snowpack and then released above them bringing snow on top of them, taking them down the slope and making it impossible for them to escape.  It is a feature of these dry slab avalanches that the trigger point is underneath the skier and this trigger sets off a physical chain reaction that causes the avalanche to release further up the slope often on a steeper pitch that where the victims are located.  We do not have the exact slope angles in this case.  But from the photos it looks like 35 to 40 degrees. The snowboarders were on crossing the slope on a similar or less steep pitch some distance further down

This video report from TV5 is the most comprehensive we can find and shows the nature of the accident and the avalanche (it is in French)
https://www.youtube.com/watch?v=fGAGgzOQ6Ac&list=LLm7IVRfpR4aLRzuDi4JBQ5A&index=1

Here are the top 3 lessons.

You can see the bulletin for the 13th February if you click here. The bulletin highlights that skiers could expect to find new windslab on north and west facing slopes. The slabs could be up to 40cm and had come from recent Foehn winds. These slabs could be released by the passage of one skier. There was a specific risk around 2500m. The Tignes Lavachet wall is a west facing slope. The avalanche released at around 2500m.  Click on the image to read the bulletin 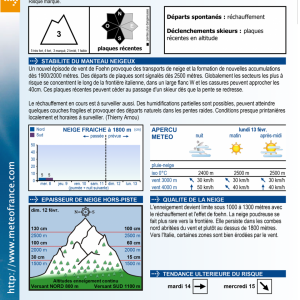 The avalanche danger rating is marked as level 3.  This means there is a CONSIDERABLE risk of localised avalanches.  They could be triggered by the passage of one skier on a vulnerable slope.  The danger rating of 3 is possibly the most misunderstood rating.  It is a score of 3 out of 5 which sounds average or medium.  But the word in French is “Marque” and in English is “Considerable”.  This is not really medium or average. See and listen to our detailed definitions click here

Close-up of the top of the avalanche. It released just under the rocks: Tignes Webcam

2. Go one at a time across vulnerable slopes

The golden rule of off piste is to go one at a time, moving from safe place to safe place. This is most important when crossing slopes that might be triggered by the weight of a skier. So this discipline applies when you are on or close to slopes that are steeper than 30 degrees.  This becomes even more important when you are walking or skinning and consequently moving slowly.  It is the weight of the people that triggers the snowpack to release.  Moving slowly means the weight is present for longer. More than one skier on the same snowpack increases the weight and increases risk considerably.

The second advantage of this “one at a time” practice is that only one person is exposed to danger at one time.  This can save lives and means there are more people available to conduct a speedy rescue.  It seems likely in this accident that 4 boarders were exposed to danger at the same time, this meant the whole party was taken and buried.  It also means the party may have added the weight of 4 people to the snowpack.  Since the group was walking, the weight would have been applied for some time.

It seems likely in the Tignes avalanche accident that 4 boarders were exposed to danger at the same time, this meant the whole party was taken and buried.  It also means the group had added the weight of 4 people to the snowpack.  Since the group was walking, the weight would have been applied for some time.  This increased the risk.

3. Look out for Terrain Traps

One type of terrain trap is a bowl, holes or gully where snow can pile up.  In this accident, the snow piled up against the avalanche protection mound.  This mound was built to protect the buildings in the town. What it did on Tuesday was to create a gully where snow piled up.  The victims were buried in 6m to 8m of snow which makes speedy rescue pretty much impossible.

This image shows the rescue teams probing the snow which was piled up against the avalanche protection. 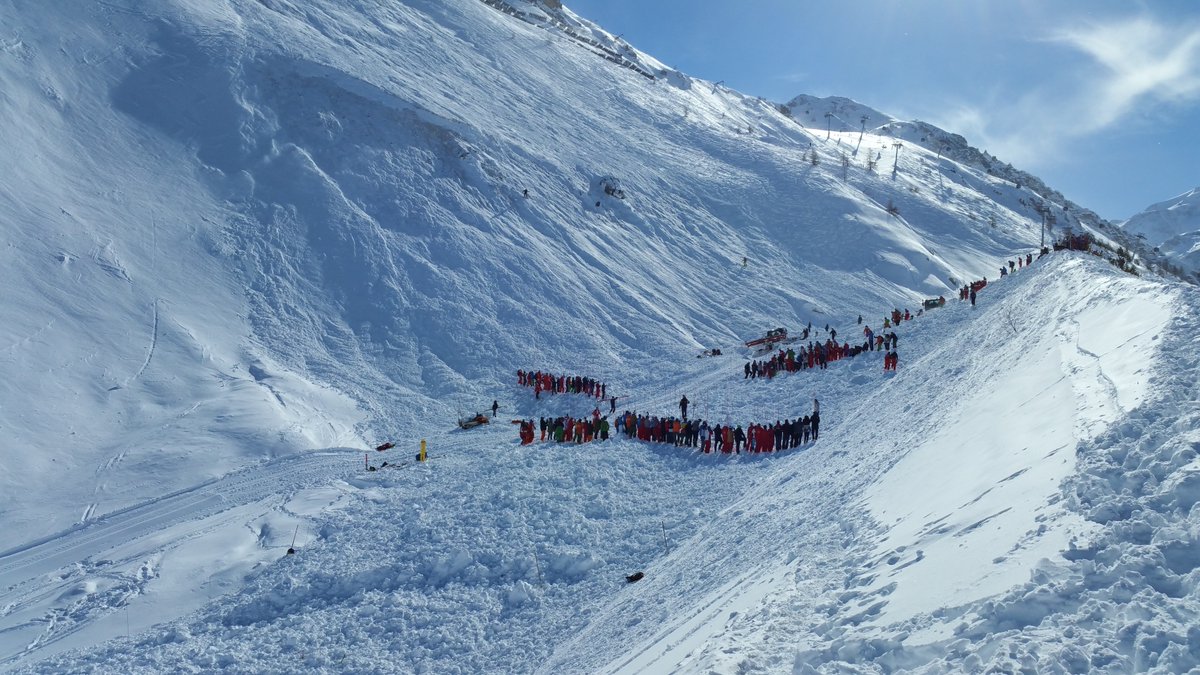 Is it safe to go off piste now?

Henry was asked this question in an interview with ITV and Good Morning Britain click here to view.  His answer was that we do not stop driving our cars when there is a fatal car accident on the roads.  What we do is take more care.  Going off piste is the same.

These three lessons we have highlighted here are part of the HAT off piste checklist method to keep you safe off piste so you can have more fun.  Whether it is safe out there depends on you. 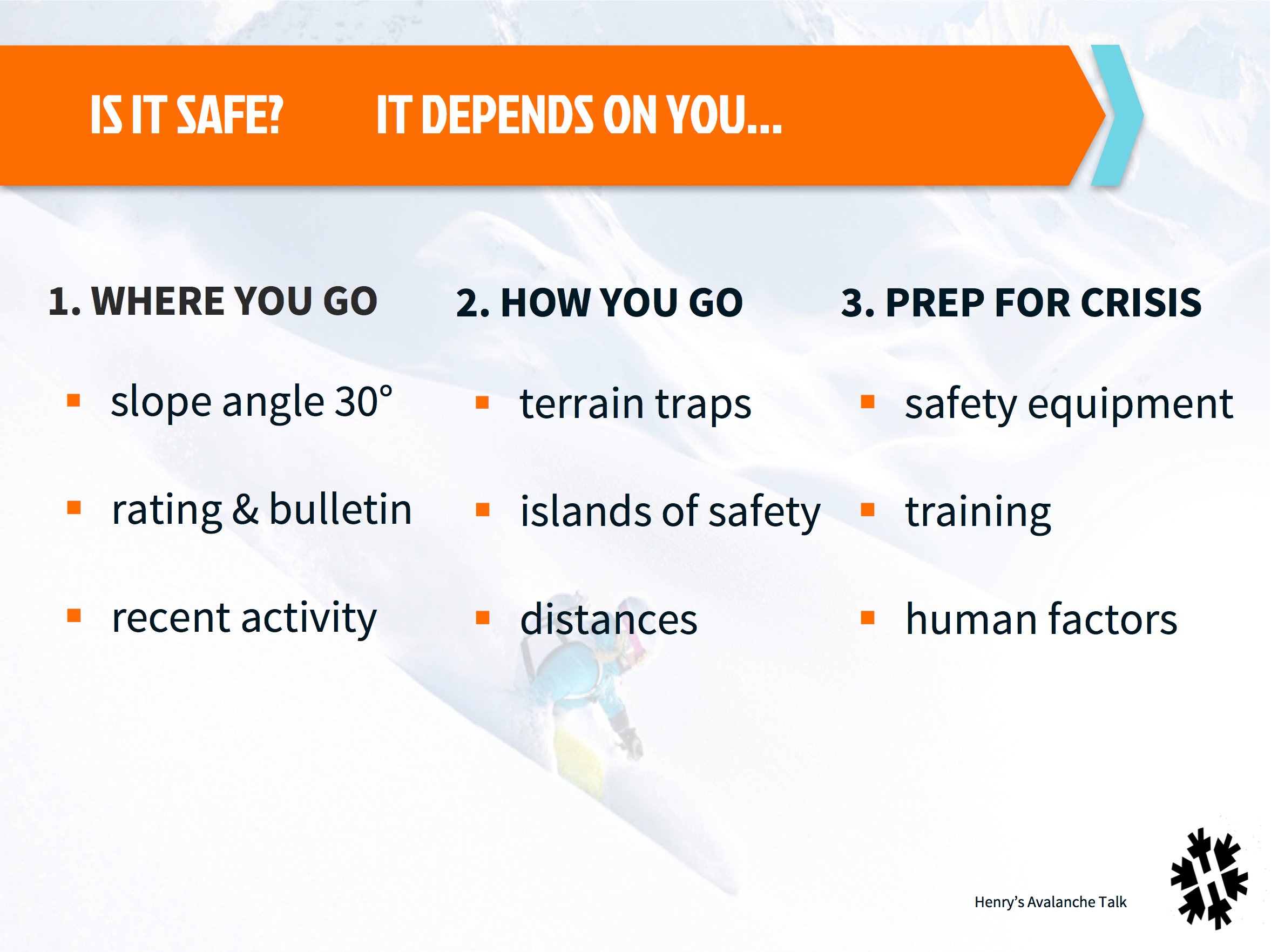 Update on the boarders route

Chris Radford just discussed with Henry the most common skiing and boarding route through the barriers and across to the slopes above Lavachet.The usual route is the one the group seems to have taken through the avalanche barriers and then a quick traverse under the steep cliffs onto the next shoulder. This gets you beyond and away from the terrain trap and onto slopes that are less steep, more fun and much safer. Another issue here is that skiers can do the traverse quite quickly on skis whereas boarders usually have to stop, take their board off and walk across. This is much slower and puts more pressure on the snowpack than a ski traverse. The danger of triggering a release above only exists in a short section of the traverse. It looks like the boarders were caught in that short section