The big news is that it is going to get colder and we are expecting significant snowfall over the weekend especially on Sunday. The drop in temperature starts on Friday night and next week we will see freezing levels down at 300 to 800m whereas during this last week the freezing level was much higher between 2000m and 3000m.

The weather looks brighter on Tuesday and Wednesday, after that we will enter a prolonged period of unsettled weather and generally cold to very cold. This will continue up to and beyond Christmas. There will be bright spells in between the snow and clouds. But we are expecting a northerly and northwesterly flow of air bringing regular snow and clouds and cold weather. 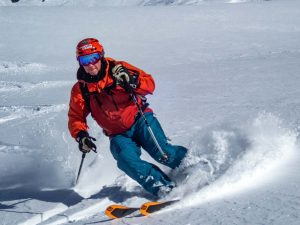 While off-piste snow depths are currently quite sketchy below 2400 m, the new snowfalls will change all that.

We’ve had a very mixed bag of off-piste conditions this past week. The wind’s been playing a massive role, blowing the snow around the mountain. In exposed areas and mountain tops, the snow’s become dense and crusted, if not blown off altogether. Conditions have been a lot more consistent a little lower down at around 2800 m, where it’s a bit more sheltered, and we’ve sometimes even ended up with a surprise bonus 15 to 20 cm of fresh powder. We have found some great snow up around 3000 m though. It’s always worth going out there to see what you might find!

After mild conditions and rain at the beginning of this past week, it’s now getting colder and snow conditions are improving.

The rain-snow limit has recently been at around 2400-2500 m (give or take based on local microclimates). Below 2500 the snowpack conditions have become a lot more stable due to the snowpack ‘humidified’ by the rain – compacted down and refrozen. 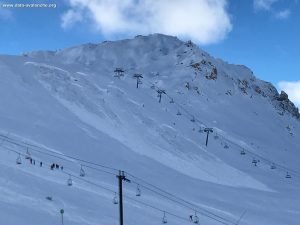 Dataavalanche.org report of avalanches triggered by the piste patrol under the Tommeuse lift in Val d’Isere

At higher altitudes above the rain/snow limit, it’s much less stable. There’s been significant natural avalanche activity over the last few days, with slabs popping out and releasing. Some big slopes have slid. Henry reports that most of this activity seems to be localised i.e. not entire slopes coming down, but slab releases big enough to be dangerous. He’s noticed recent avalanche activity above 2400 m on all slope orientations. The primary reason for all this diverse avalanche activity is a sensitive weak cohesionless layer of  ‘faceted grains’ on all aspects /all slope orientations above this 2400 m threshold – this also confirmed by reports from piste patrollers. This will make for a particularly unstable and dangerous snowpack during and after the snowfalls. 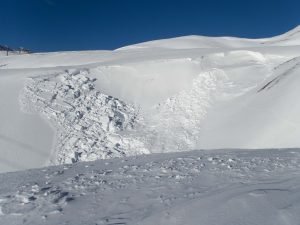 Once the snow comes, we’ll be staying mostly on slopes less steep than 30°. If we do decide to enter into areas that have slopes steeper than 30°, it will be after a lot of thought and discussion. We will then be sticking with the decision making and risk reduction HAT Framework: avoiding all terrain traps, keeping our distances between each other as we ski, stopping at islands of safety and generally looking out for each other.

The daily avalanche bulletins are now starting to appear, and are full of vital information. Always check them before you go off-piste, talk to the pisteurs, and look what’s happening for yourself….. Val d’Isère’s avalanche risk today is estimated at 2 on the European scale of 5, but this was a 3/5 yesterday and will rise with any significant fresh snowfall accompanied by wind. See our descriptions of what all the avalanche danger ratings mean.

MONDAY 10 AND TUESDAY 11 DECEMBER
Some snow and showers until Tuesday at midday; then expect the sun to come back The rain-snow limit is 900 to 1200 meters. Wind variable and light but some strong gusts.

WEDNESDAY 12 AND THURSDAY, DECEMBER 13
Mostly sunny, then chances of rain and snow. The rain-snow boundary is in the valleys
Weak wind, variable.