Expecting some light snow this weekend. This will mainly be above 2200m. Then we expect very mild and warm weather in the middle of next week, with the 0C isotherm moving up to 3000m. Any snow will only fall above 2400m. Then from Friday 7th December, we are optimistic (fingers crossed) for a drop in temperature and some significant snow on the weekend of 7th to 9th December. This snow will come from the west and north-west, so it should favour good snowfall across the French Alps. We will update this forecast midweek. And by Friday morning 7th December we will be more certain.

After the 9th December, it looks like we will get a normal seasonal westerly weather pattern with the usual rain and wind in the UK and fine weather in the Alps.

The exact pattern and timing of all this is uncertain. This prediction is based on the expectation the Jetstream moves north during next week and then sinks south again from Friday 7th December. 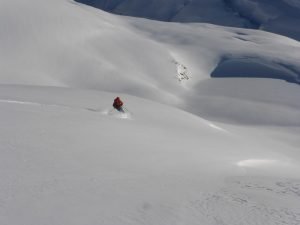 For some lucky high-altitude resorts of the N French Alps, the early season is off to a great start! In Val d’Isere, for example, there’s some lovely off-piste skiing to be found above 2500 m. It is much more limited at lower altitudes. As we write, there’s not enough snow to ski down to resort level. As long as it stays cold enough, snow-cannons are working at full pelt to turn that situation around. We need a lot more snow, but of course, it’s still very early days with many resorts not opening for another week or two!

The best quality off-piste snow is above 2500 m, on N facing slopes. With recent cold temperatures, snow conditions have been great all week. We’ve benefited from regular small top-ups of 5 to 15 cm of fresh snow, which have made for some beautiful skiing on nearly deserted slopes (see Wayne Watson’s photo to the left). We’ve been finding bits of gorgeous light powder, sometimes even right next to the piste. In more exposed areas, the snow has been wind-compressed, and tougher to ski. We’ve also been able to find strips of deeper powder, e.g. in gullies where the snow’s collected, having been blown in by the wind. Unfortunately, it’s due to get a bit milder over the next few days, so these light snow conditions may not stay much longer.

The main off-piste risks to look out for at the moment are hitting rocks and obstacles. Many of these are buried just beneath the snow surface, and at best can cause some nasty damage to your skis. The snow pack’s still shallow: While it may be around 60 cm deep on shaded slopes above 3000 m, it’s down to just a few cm at resort level, or non-existent. 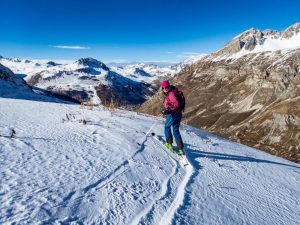 Meteo-France’s daily snow bulletins won’t start appearing for another week or so. In the meantime, some resorts are producing their own local avalanche risk estimations. Val d’Isère’s current avalanche risk is estimated at 2 on the European scale of 5. See our descriptions of what all the avalanche danger ratings mean.

There are areas of windslab around to watch out for, which can be triggered by off-piste skiers on steep slopes. We need to watch out for this, as well as thinking about rock avoidance. There have been a few incidents of slab avalanches being triggered by ski tourers on N’ish facing slopes, mainly in the S Alps.

SUNDAY 2
Grey everywhere with clouds in the mountain. Precipitation, initially low and scattered, becomes regular and sometimes moderate in the afternoon and until midnight. Snow only above 2200 m despite some brief flakes around 1800 m in the morning (10 to 25 cm towards 2500 m). The northwest wind is strong in altitude (gusts up to 80 km / h from 3000 m). Temperatures change  from 0 / -3 to 4 degrees around 2000 m (isothermal 0 degrees temporarily at 2200 then around 2700 m).

WEDNESDAY 5 and THURSDAY 6
Very mild
A bit of sun, clouds and passing light rain are on the agenda these days while the temperature level is still abnormally high. Westerly wind less strong.

FRIDAY 7 and SATURDAY 8
A new storm from the Northwest and cooler
The bad weather LOOKS to arrive with precipitation probably a lot, and suggesting a possibility of significant snow accumulation on the mountains. The temperatures are declining seriously. To confirm.

The HAT checklist (or Framework, as we call it) has “being well prepared” as one of its three answers to the question “Is it safe out there?”  This means being well prepared for a companion search and rescue – “prepared” to get the victim out in 15 minutes or less.

Check your equipment, and get trained on how to use it. HAT runs some great transceiver training events in the UK, as well as in Val d’Isère. You can make sure all works, so you can mend or replace things – particularly your transceiver, shovel and probe. Get it out, examine it all and make sure you know how to use it.

Always do a transceiver partner check (making sure everyone’s transmit and search functions work) before you set off. We’ll be publishing a blog on this next week!

Ensure your transceiver batteries are working, and functioning on at least 70%. (Remember they use a lot more power on ‘search’ mode).