Mixed weather ahead with sunshine, cloud, and some snowfall

There are still some excellent off-piste conditions around. Especially when temperatures are low, there is some wonderful cold, dry, light powder snow to be found. As the day warms up, this may become humidified and heavier to ski. In exposed high mountain areas the surface snow has often been wind-affected: densified, hardened or crusted. There’s also a lot of windslab around that, as off-piste skiers, we need to be wary of.

It’s always worth venturing out, even on cloudy uninspiring-looking days it often turns out to be better than you think it’ll be!

Strong S’ish winds at high altitude and Foehn and Lombard lower down will be blowing snow around, causing new accumulations and more windslab snow to form. This new windslab will particularly unstable on the colder N facing slopes shaded from the sun and in the lee of the wind, where it will be lying on top of recently fallen light and loose unbonded snow. Of course, these types of slopes are where the nicest snow can be found for off-piste skiers. Beware of high, steep, N facing slopes. Meteo France warn us that the weight of just one skier passing by could be enough to trigger a windslab avalanche.

If you’re unsure, stick to slopes of 30° and less to start the day with. (30° is the steepest part of a red run in Europe). Keep an eye out for signs of recent avalanche activity. If you do see any, avoid similar facing slopes with above 30° steepness.

We will almost certainly see quite a lot of direct action avalanches occurring over the next week (these are avalanches that are triggered or occur during the snowfall or in the 24 hours after the snowfall), especially later in the day as temperatures rise, and the snow becomes heavier and humidified. As well as the rising temperatures, rain, fresh snow and wind will also contribute to natural avalanches occurring. We’ll also probably see the odd glide crack avalanches releasing – not many glide crack releases will be occurring and, again, these are not predictable and not triggered by people. So just make sure you don’t hang around under them!

Info on specific risks to look out is given in the daily avalanche bulletin for your area.

We’ll also be keeping you up to date through our HAT blog and Facebook page. The avalanche danger ratings are explained on henrysavalanchetalk.com/hat-advice/danger-rating. 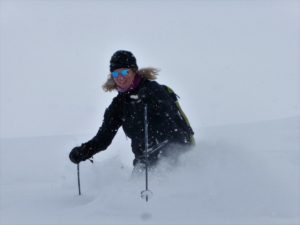 Always fun, even when you can’t see much! Wayne Watson photo

Thursday 15th: Unsettled weather. Cloud will thicken as the morning goes on, and we could be in for some fresh snow, especially in the early afternoon. This will be heaviest around the foothills near Chambéry to start with and in the more S areas of the Maurienne (e.g. Valloire). Rain/snow limit around 1700 m, later dropping to 1300 m. It looks as if a lot more snow will be falling in the Southern Alps. Localised areas above 2300 m particularly affected by the Foehn wind could receive up to 30 cm fresh snow. Possibly 10 cm expected in the Haute Tarentaise (e.g. Val d’Isere, Tignes). Very strong SW to SE wind above 4000 m during the morning. This will calm down and turn W to NW as night comes in.

Friday 16th:  A fairly sunny day, but with high clouds building in the afternoon. A few snowflakes at very high altitude towards the end of the day. Possible very light snowfall overnight: no more than 5 cm for most areas – possibly up to 15 cm in the Haute Maurienne part of Savoie (e.g. Bonneval). Rain/snow limit around 1500 m. Very light W-SW wind at high altitude, turning more S into the evening, then E to NE by the end of the night. Some Foehn and Lombard near the French/Italian border. 0° C at 1500 m, climbing to 2000 m during the day, then down to 1000 m overnight.

Sunday 18th & Monday 19th: Sunday: Sunshine and snow showers down to low altitude.  Monday: Snow showers continuing in the morning, clearing up in the mountains as the day goes on.

Use recent avalanche activity and accidents as a clue for how unstable or stable things are on the day. Figure out what altitudes and exposures any slides/avalanches are happening on – and avoid similar ones yourself.

Consult the avalanche bulletin the night before, talk to pisteurs on the day, and look what’s happening for yourself….

Ride Hard, Ride Safe and have a great week everyone!