Very cold, with a lot of snowfall near the French/Italian border 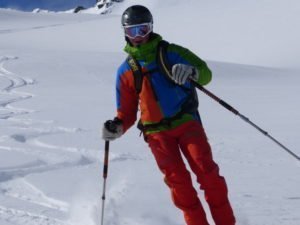 Skiing the light fantastic snow. Wayne Watson photo (It should hopefully be like this again from Tuesday!)

Snow depths remain fantastic this season. There’s still some great off-piste skiing to be found above 1500 m or so. With continuing low temperatures, there’s some incredible cold light powder snow out there. And it will remain very cold at least until next week….

When venturing off-piste, we’ve been finding some areas where the surface snow has become crusted. These are particularly on the more sun-exposed S facing slopes and below 2300m in many places. Wind has played its role in hardening the snow near mountain tops and ridges.

It looks as if it we’ll probably face ‘flat light’ conditions for the next few days with all the cloud around. This could make for some tricky route finding off-piste. Hopefully it’ll be sunny again from Tuesday onwards though!

The overall stability of the snowpack is very good, with no persistent weak layers at depth. However, there are some weak layers that have developed nearer surface level in the recent the snow and in between layers from the recent snowfall episodes over the past week/weekend for example, particularly above 2400 m. Collapsing of these week layer or ‘whoomphing’ was reported and some localized slabs (slabs releasing on parts of slopes rather than the whole slope) have been triggered over the last few days on steep slopes – slabs have released during the rapid increase of temperatures on quite a few steep slopes exposed to the sun this past Sunday for example. Cold temperatures (especially in parts of the mountain not warmed by the sun) are helping to transform the top few cm of snow into faceted grains, “sugar snow”. This will become a weak layer when any fresh snow lands on top of it (as will happen in some areas over the next few days – see forecast below).

Any danger/risk related to avalanches this week will be directly related to recent snowstorms. As soon as (IF) we receive a substantial amount of fresh snow, the avalanche risk will rise substantially i.e. from 2 where it is now in much of the N. French Alps to a solid 3. In the 24 hours following the storm there will most probably be some initial instability (‘direct action avalanches’) especially on slopes facing the sun, leading to some natural avalanche activity as a result of a rapid increase in temps on those slopes due to incoming radiation from the sun. As this activity on those sunny slopes subsides, the more ‘delayed instability’ will persist on colder slopes facing North’ish where the best skiing will be. The specific nature of these risks to look out for will be outlined in the avalanche bulletin, and we’ll also be keeping you up to date through our HAT blog and facebook page. For now, we believe that by applying basic risk reduction measures that you learn at avalanche talks and courses will be enough to keep you at a reasonable risk level in these areas – a risk level that most people would deem acceptable… at least no more dangerous than the risk of a collision while skiing on a crowded piste at the moment! For those of you who are familiar with off-piste risk reduction measures, here’s a quick overview in ‘framework’ form henrysavalanchetalk.com/wp-content/uploads/2017/01/Off-Piste-Quick-Reference.pdf

Finally, don’t hang around under glide cracks, but passing under them swiftly while keeping an eye on them seems completely reasonable to us at HAT.

It looks as if some areas of Savoie near the French/Italian border (particularly Val d’Isère and Tignes) are due to receive some significant amounts of fresh snow on Friday and Saturday. It’s pretty safe to assume that this will also affect areas of Haute-Savoie and Isère departments near the border.

The tragic avalanche accident in Val d’Isère a few days ago, when a father and daughter were taken by avalanche while they were skiing on a closed piste, happened within around 24 hours of a snowstorm. More than 40 cm of snow had fallen and loaded the steep slopes above, the storm was followed by some pretty intense warming during the day. The combination of these two factors led to a lot of avalanche activity. The piste had been closed because of the danger.

You can see what the avalanche danger ratings mean on henrysavalanchetalk.com/hat-advice/danger-rating. 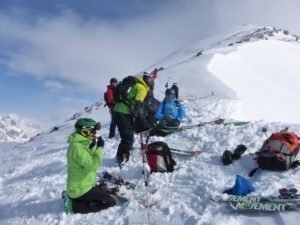 Thursday 22nd: After a good overnight refreeze, it will be increasingly cloudy as the day goes on. This cloud cover will be very persistent along the French/Italian border. E wind at high altitude, gusts up to 50 km/hr above 3000 m. Cold temperatures, well below normal for the time of season. (Keeping the powder snow lovely and light!).

Friday 23rd:  Plenty of cloud in the mountains, often socking in the mountain tops. This cloud will persist over the French/Italian border, bringing snowfall from midday onwards to the Haute Maurienne (Bonneval, Val Cenis), and some of the Haute Tarentaise (Val d’Isère, Tignes) and most probably along the Italian border areas of Haute Savoie and the department of Isère too. 10 to 30 cm fresh snow expected here. Wind turning E to SE, with probable gusts of Foehn/Lombard wind near the border (up to 50 km/hr). Temperatures remaining low for the time of season.

Saturday 24th: A lot more snow expected near the French/Italian border, again particularly along the Italian border areas e.g. Haute Maurienne and in Val d’Isere/Tignes in Savoie and along the border areas of Haute Savoie and Isère. These areas will see snow falling most of the day, with up to 40 cm fresh snow expected! It looks like it will be quite localised, with other areas further from the border just seeing a few snowflakes falling. E to SE wind with strong gusts near the French/Italian border. Strong gusts of Foehn/Lombard wind near the border, up to 80 km/hr above 2500 m. Temperatures temporarily a little warmer due to the effect of the Foehn wind.

The main risk to off-piste skiers this week will be directly related to the amount of fresh snow we receive… and of course, Where you go, How you go and How well prepared you are to quickly get your mates out from under the snow if something happens.

Links to the avalanche bulletin for different areas of the N French Alps and beyond can be found on henrysavalanchetalk.com/hat-advice/avalanche-bulletins.