Some nice ‘bluebird’ skiing days ahead, and possibly a bit of snow too! 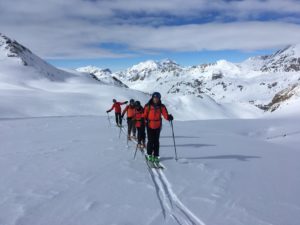 Intro to ski touring on our Off Piste course this week

Snow depths remain extremely good, and probably will continue to be so until the end of season and beyond. It’s looking fantastic for some possible hut touring in the Spring!

Off-piste areas easily accessed from the lift system have now been tracked out. However, by using skins and touring skis, we continue to find some excellent off-piste snow conditions in high altitude areas sheltered from the wind and sun. Here, as long as the cold temperatures continue, there is often still some lovely cold light snow to be found.

Elsewhere the surface snow is often very wind-affected, i.e. hard and crunchy. On sunny S’ish facing slopes, we’re usually greeted by surface crust first thing in the morning, due the snow humidifying and melting by day and refreezing overnight.

There are some areas of windslab around, particularly on N to W facing slopes above 2200 m. These could be triggered by skiers passing by.

There are still plenty of ‘glide cracks’ around, those alarming looking ‘brown frown’ full-depth cracks in the snowpack. If these release, they can turn into large volume avalanches and cause quite a lot of damage when they hit trees and resort infrastructures. However, they are not set off by skiers, so unless you hang around underneath one for long, you shouldn’t be too alarmed by them. Continuing cold temperatures, at least up to Sunday, will prevent the glide cracks from getting much worse. They tend to release in warmer temperatures when there is a lot of liquid water at the interface between the snow and the ground. They can release at any time of day or night, though do so most often in the warmer afternoons. There are good examples of recent ‘plaque de fond’ avalanches on www.data-avalanche.org 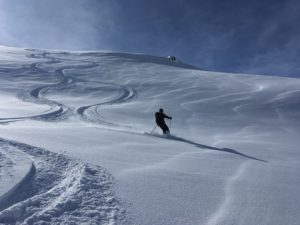 Thursday 8th: After a cold night with temperatures down to -14° C at 2000 m, it will be a sunny day in the mountains. There could be some cloud hanging around near the French/Italian border, and at altitudes below 1800 m especially in the more W parts of Savoie around the foothills near Chambery. Maximum daytime temperatures on sunny S facing slopes: 0° C at 2000 m, -7° at 3000 m. Light SE to SW wind at 2500 m, 5-20 km/hr, and very light N wind at 4000 m. Some Lombard/Foehn wind near the French/Italian border.

Friday 9th:  Another cold and sunny days in the mountains. -10° at 2700 m. SW wind, 5 – 20 km/hr at 2500 m during the day, turning more N overnight. Some gusts of Lombard near the French/Italian border. There could be some very light localised overnight snowfall in some areas of Savoie (no more than 5 cm though).

Saturday 10th: Another sunny day in the mountains. Very light NE to N wind at very high altitude. Overnight, there could be some more very slight localised snowfall.

Sunday 11th & Monday 12th: Sunday: A milder day as a warm weather front comes in. After a bright morning, it will cloud over, bringing snow or rain in the afternoon and into the night. Monday: Some residual snowflakes floating around in the morning, clearing up as the day goes on.

The snowpack is broadly stable but there are pockets of risk in localised areas. These are mostly where you find windblown fresh snow creating a new slab. Keep an eye on the wind, look for these slabs, these often have the best snow, but carry some risk so you have to judge how safe it is using the HAT checlist and guidance.

Check the danger rating on the avalanche risk bulletin for your area.