Milder temperatures and some snowfall up high 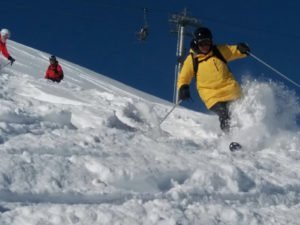 Ken Dolman, aged 77, enjoying off piste with friends skilled at managing the risk and keeping it safe. Paul Mongan photo

The quality and quantity of off-piste snow above 1600 m remains great! As we set off first thing, the surface snow is often cold and light. Unfortunately, with rising temperatures over the next few days, it will become more humidified and could be quite crunchy (depending on how much overnight refreeze we get). In wind-affected areas, such as near mountain tops and ridges, the snow will become very hardened, if not blown off altogether.

We’ve heard of quite a lot of avalanche activity in Savoie this week, and even more in Haute Savoie and the S French Alps, where there have been some fatal accidents. This has been due to a combination of factors:

We spoke about this weak layer in last week’s report, and it’s also clearly demonstrated in this video by Alain Duclos, avalanche expert and technical adviser to HAT: www.youtube.com/watch?v=opqhKWYlt0k

In the next few days, any instability in the snowpack will be due to different consistencies of snow (e.g. the older weak layer of loose cold snow under more recently fallen wetter snow). Plenty of windslab has been forming, especially on leeward N’ish facing slopes above 2400 m. It may not be very thick (often less than 30 cm) but Meteo France warn that just one skier passing by could be enough to trigger it – especially on steep slopes near mountain ridges. As off-piste skiers, we still need to be especially wary of those high, cold NW to NE facing slopes where the best quality snow is often to be found.

While the colder, N facing slopes are the most dangerous, don’t assume the warmer S facing ones are safe though! At this time of year with it getting warmer, we’ll probably see plenty of direct action avalanches on these sunnier slopes.

We could also see some quite large glide crack avalanches releasing, as we’ve been mentioning in previous weeks.

Info on specific risks to look out is given in the daily avalanche bulletin, We’ll also be keeping you up to date through our HAT blog and Facebook page. The avalanche danger ratings are explained on henrysavalanchetalk.com/hat-advice/danger-rating. 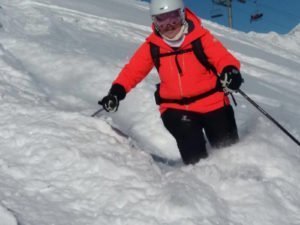 Thursday 8th: After a cold night with some fresh snowfall, the sun should quickly make an appearance and temperatures will rise to about 1 or 2°C at 2000 m, 0° between 1500/1800 m. A thin layer of very high cloud will start thickening in the afternoon. The wind will change from NW overnight to alternating between W and SW in the day, 20 – 40 km/hr at 2500 m.

Saturday 10th: Strong SW winds overnight, with Foehn and Lombard gusting up to 100 km/hr. A mild and cloudy day with possible sunshine in the afternoon. We could see snow showers above 2400 m (maybe rain at lower altitudes). The cloud will be thickest along the French/Italian border where we could see snowfall down to 1700/2000 m. Maximum daily temperatures: 14°C at 1000 m, 6°C at 2000 m.

Keep to the ‘low hanging fruit’ in the first 24 hours after significant fresh snow fall. That means sticking to  low-angled slopes below 30° – the steepest part of a European red run).

Look out for evidence of recent avalanche activity, and only venture onto steeper slopes when you’re really sure you know what you’re doing.