Plenty of sunshine in the Alps and no significant snowfall expected! 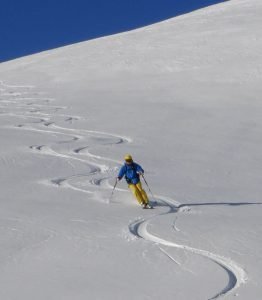 It all started so well! We received a great 80+ cm snowfall in mid-November, followed by another 20 cm or so. Unfortunately, we then had a prolonged episode of Foehn wind, lasting several days. The good thing was that, for some lucky areas near the French Italian border (e.g. Val d’Isere & Tignes) it brought very significant amounts of snow to high-altitude areas, with 80 – 200 cm snowfall above 2,100 m. It also caused a lot of snow transportation at higher altitudes along with windslab formation and brought a lot of rain to lower altitudes, which unfortunately washed away a lot of the earlier snow .

That said, there is some excellent off-piste skiing to be found above 2100 m. Particularly on high, sheltered, north-facing slopes we’ve been finding some nice cold powder snow. We are having to walk with skins and touring skis to find it, as areas near the lifts get more and more tracked out.

At these high-altitudes, where a huge amount of snow has fallen, there are not many obstacles to encounter under the snow. However, just because there aren’t many obstacles up high, don’t be lulled into a false sense of security. The situation changes rapidly as you ski lower down the mountain!  There is a massive difference between the snow coverage at 3000 m (where it’s great) and 1800 m (where it diminishes to virtually nothing). 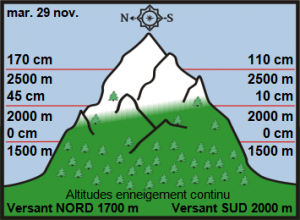 As you can see from this diagram, we’re currently able to ski down to about 1,700 m on N facing slopes and down to 2,000 m on S facing ones. A high-pressure weather system is now installed over the Alps, with plenty of sunshine expected for the next few days. This won’t help with the snow line level. However, the pistes are being nicely prepared, snow canons are working, and we can ski down to lower levels using the groomed pistes.

There have recently been quite a lot of naturally occurring full-depth wet snow avalanches below 2,300 m. Other than that, the main risk is of hardened windslab, especially on steep W/NW-ish facing slopes near the windy French Italian border, where those huge amounts of snow fell. These areas of slab can be extremely thick.

Val d’Isere have been estimating the Avalanche Risk at about a 3 on the European scale over the last few days. For what all the danger ratings mean see www.henrysavalanchetalk.com/hat-advice/danger-rating

Slow down when you’re skiing off-piste. Even though there’s deep snow coverage up high, there are plenty of obstacles beneath the surface as you descend to lower altitudes. Recall Michael Schumacher’s terrible accident a couple of years ago.

We have some great on-line avalanche talks, the first of which is free. Check them out on vimeo.com/ondemand/henrysavalanchetalk

Stay safe and have fun off-piste, everyone!