Unsettled, particularly near the French/Italian border! 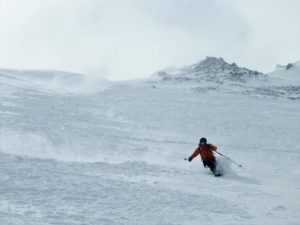 Normally at this time of year we’re enjoying regular melt-freeze cycles, which bring nice smooth ‘spring snow’ skiing. This year, however, we’re still in transition between cold dry winter snow, and humid to wet spring snow*. When we eventually receive these repeated cycles of melting and freezing, the snowpack will become much more solid and stable. The real challenge at the moment is how long this transitional period is going to last!

Mild temperatures and windy weather look set to continue into next week, with no really significant overnight refreezes or really ‘bluebird’ sunny days.

Areas near the French/Italian border could be in for quite a bit more snowfall. This fresh snow is likely to be very humid and wind-affected. There will also be a lot of windslab forming, especially on N’ish facing slopes at high altitude. This could be triggered by a skier passing by, or even release naturally on very steep slopes.

At lower altitudes, direct radiation from the sun will rapidly humidify the snowpack. More big wet snow avalanches will be coming down. Some big avalanches came down last week, especially on S facing slopes in the late afternoon. Of course, we’d avoid skiing those sort of slopes at that time of day at this time of year, anyway. It didn’t freeze for three or four days in a row, so the snowpack became unconsolidated and avalanches occurred. See www.data-avalanche.org for examples.

It’s been a very difficult time for weather forecasters and piste patrol services in keeping roads and pistes safe. Plenty of these have had to be closed to the public, especially in warmer afternoons, for fear of glide cracks or other full depth avalanches coming down. Avalanche danger ratings have been set at about 3, rising to 4, on the European scale of 5, indicating the problem these potentially large avalanches present to the authorities. Avalanche danger ratings are explained on henrysavalanchetalk.com/hat-advice/danger-rating.

Check the daily avalanche bulletin for your area if you’re going off-piste. We’ll also keep you updated on any change in conditions through our HAT blog and Facebook page.

Our recent Facebook post shows a video of an avalanche which released naturally from about 2500 m on a steep S facing slope near Le Fornet. It happened at about 5 pm. Thanks to Aaron Cassells for that video.

HOWEVER, this (video) is a very good example of how naturally-occurring avalanches on S’ish facing slopes in springtime can be really dangerous. Especially if you’re not paying attention to clues (such as temperatures being consistently above freezing in the few days after a snowfall, slopes above you subject to strong radiation from the sun (i.e. S’ish facing slopes), recent fresh snow, and things like road and piste closures).

The instability and unpredictability that we’re now experiencing is, in my opinion, largely because we are STILL in a phase of transition from a cold, dry snow snowpack to a wet/humid snowpack in much of the Northern French Alps at 2000 m and above. Once the snowpack becomes more wet/humid, saturated with melt-water and subject to below-freezing temps at night, things will become a lot more stable and predictable in these areas… but we are definitely not there yet.

The snow that’s forecast over the next week, along with the minimal refreezing or above freezing temperatures at 2000 m, will increase avalanche activity in Northern French Alps and surrounding areas (e.g. Pila, Aosta, Italy) especially when the sun hits the new snow. Now, and over the next week or two, is a good time to be paying serious attention to wet-snow avalanches coming from slopes above, like in Aaron’s video.

Tuesday 17th & Wednesday 18th: Bright spells and a risk of showers in the afternoons. Remaining mild.

Watch out if it doesn’t freeze at night, along with prolonged warming trends (especially above 2000 m where there’s still a lot of winter snow around). That, combined with any new snowfall, wind, and radiation from the sun, could lead to some very big avalanches occurring.

You can have a fantastic time off-piste and stay safe as long as you’re applying basic risk reduction measures. These can be found in our HAT off-piste checklist.

* In general terms ‘humid snow’ is the sort of snow you can make a snowball with when you squeeze it; if you squeeze a handful of ‘wet snow’, free water will come out of it.