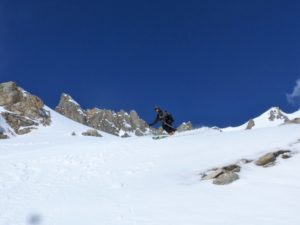 With milder temperatures and some sunshine forecast, we’re optimistic that ‘spring snow’ conditions will come into place in the next few days. The snow’s already beginning to transform on some sunny slopes. We need regular melt/freeze cycles to help create more widespread smooth spring snow conditions, which are so lovely to ski. These cycles normally occur at this time of year, and it shouldn’t be long now!

Cold powder snow is now a thing of the past, as temperatures have risen rapidly in the last few days. Any fresh snow arriving this week will quickly become heavy and humidified, particularly on the lower sunnier slopes. It could give us a nice cushion first thing in the morning before temperatures rise though!

With repeated episodes of warm weather we’re very likely to see an increase in glide crack activity (full depth avalanches). These can involve very large volumes of snow and will occur on steep slopes that have not yet purged their snow. See www.data-avalanche.org for examples.

We’ve seen quite a few glide cracks releasing lately, particularly later in the day as temperatures rise. It is reasonable to ski quickly underneath them, because they’re not triggered by skiers but release spontaneously. Don’t hang around though, and keep an eye on it as you go. If skiing near one always make sure you have an escape route in mind and keep an eye out for any terrain traps. (Terrain traps include bowls, gullies and cliffs, which you wouldn’t want to be swept into or over if the glide crack does release).

Big avalanche releases like the one shown below are to be expected in the first wave of round-the-clock temperatures above freezing point at high altitudes of 2000 m and above. This was on a steep E facing slope in Val d’Isère at 4.30 pm on 4th April. The footpath had been closed to walkers because of pisteurs’ concerns. Video from Data Avalanche.

Wind will be transporting snow around the mountain at high altitude, causing accumulations and areas of fresh windslab (particularly on high  N-facing leeward slopes). Look out when skiing on these high N facing slopes, where any fresh snow has landed on a weak layer of faceted grains (sugar snow) or graupel. The weight of one skier passing by may be enough to trigger a windslab avalanche.

There’s a lot going on with this week’s off-piste snow and weather conditions. The avalanche risk is currently about a 3 on the European scale of 5, but may change as the week goes on. Avalanche danger ratings are explained on henrysavalanchetalk.com/hat-advice/danger-rating.

Check the daily avalanche bulletin for your area if you’re going off-piste. We’ll also keep you updated on any change in conditions through our HAT blog and Facebook page.

Friday 6th:  A spring-like day, with plenty of sunshine. Very mild for the time of season, especially in the afternoon. Maximum temperatures around 10° C at 2000 m and 0° C at 3000 m. Light to moderate S wind, with occasional gusts up to 50km/hr near the French/Italian border.

Saturday 7th: Continued very mild temperatures, as Friday. A sunny morning, with high cloud building in the afternoon. S to SW wind, with Foehn (sometimes known as the hairdryer wind) and Lombarde gusts up to 50 km/hr near the French/Italian border.

Sunday 8th & Monday 9th: Sunday: Very mild temperatures again. Mixture of sunshine and cloud. S to E wind with gusts of Foehn and Lombarde 50 to 80 km/hr near the border. We could see a ‘Retour d’Est’ on Sunday night, bringing possibly snowfall at around 2000 m to areas near the French/Italian border (e.g. Val Cenis, Bonneval, Val d’Isere). Monday: Stormy with possible snow showers.

Keep an eye on whether it freezes or not. For the first time all season, it’s sometimes staying above freezing point at altitudes of 2000 m and above, at night-time too. This can lead to all kinds of full-depth avalanches occurring (glide crack releases, etc).

You can have a fantastic time off piste and stay safe as long as you’re applying basic risk reduction measures. These can be found in our HAT off-piste checklist.

Have a great, safe week off-piste!