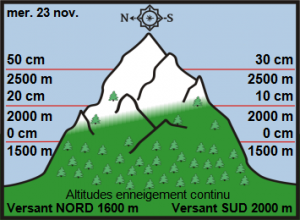 You may have heard about all that snow that fell in early November.  Well, I am afraid the F..F..Foehn has taken its toll on that snow (apart from above 3000m).  You can see the difference in these two images.  One was from last Friday 18th November and the other is on 23rd November.

In our last snow report, we highlighted that we were expecting light snow above 2300m and a lot more snow from Thursday.  Well, that seems to have happened.    Unfortunately, it has been a bit warmer than expected with freezing levels up to 2700m. 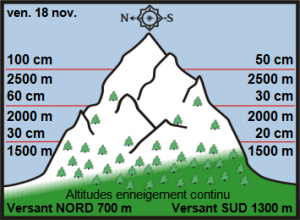 But all is not lost.  The freezing level is predicted to come down slowly to 2300m on Thursday and to 1800m by the end of Friday.  The precipitation will intensify on Thursday and continue to Friday night.  So we can expect a refreshing of the snow above 2000m.  Apparently, it is raining/sleeting hard in Val d’Isere this morning.

At the weekend we can expect the sun to come out intermittently and the lifts will open in Val d’Isere and Tignes to join Val Thorens who opened earlier in November.

The Avalanche bulletin from Meteo France uses polite factual and technical language to let us know various things.  But in essence they are telling us the snow is a bit rubbish.  The wind has blown and will continue to do so until Friday.  The snow is variously wet, crusty and wind affected depending on altitude and aspect.  Where pistes are open, the pistes could be managed, but the off-piste will not be very appealing.  There are reports of wind slabs above 2500m from winds that blew from the west and the south.  Skiers have triggered a slide at 2900m and avalanche control is active above 3000m where the snow is still cold.

For those of you working at home and not expecting to do late November skiing, there is plenty more good news on the horizon.  Albeit it is too early to be sure about the precise details of this.

Then we can expect the weather to switch to a NW airflow bringing colder air and hopefully freezing levels down to 1000m.  The weather models are fluctuating on the exact timing and track of this and it could all change, but there has been a consistent signal of disturbed weather coming in the weekend of 2nd 3rd 4th 5th December.

These weather charts from Weather Online show the GFS forecast based on the model run at 12pm on 23rd December.

N.B. If you want to know how to read these charts, the wind blows anticlockwise round the blue lines and clockwise around the red lines.  Blue and pink shading suggests varying intensity of rainfall.  The wind is stronger where the lines are closer together.

You can see a solid north-westerly  flow with precipitation over the northern alps.

By the time we get to Sunday, the weather charts are much messier and show a lot of disturbed weather with more intense rain and snow above 1500m.

So we expect there to be enough snow to make for an outstanding opening weekend in Val d’Isere on 26th November and by 5th December the snow depths should be looking good again.

What this will do to avalanche danger remains to be seen.  It depends on the wind and the temperature, so the best thing as always is to read the bulletins from Meteo France.

Time to be sure your equipment is working and you know how to use it.  Get it out of the attic or the cupboard.  Check all the moving parts. Be sure your boots and skis are as you remembered them.  Test your avalanche transceiver, get your probe out and see if you know how it works, see if you can open it quickly, examine your shovel.

AND, if you have not done any transceiver training for a while, then take a look at our special offer here.