A number of accidental avalanches have taken people for some impressive rides in the last few days in the Northern French Alps and surrounding areas.  They were all triggered by the victims.

We believe all of the ‘victims’ are OK. Does anyone have evidence to counter that?

Here’s a photo that gives a good example of the recent avalanche activity (courtesy of Andreas Bjorklund of Alpine Experience .) These slabs are on ENE facing slopes around 2400m. They were triggered naturally at some point during the storm on Friday/Saturday in Tignes, France. 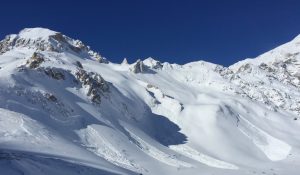 It seems most activity has been triggered on steep parts of North East to East facing slopes (leeward slopes) at about 2500m. Along rock bands and convexities. There have been a couple on other North’ish facing slopes too.

Météo-France agrees with this.  They have commented about recent accidental avalanches on NE facing slopes in their bulletins for Savoie. Also other comments for the northern French Alps have been observing recent activity mainly on leeward slopes above 2200 m.  This is particularly on shaded parts of the mountain i.e. North’ish.

Please add comments here or any observations of recent avalanche activity on our Henry’s Avalanche Talk Facebook page with activity that you’ve seen!

My tip for myself and others is to be careful over the next few days as we go searching for untracked powder on steep slopes – the lingering instability will be there! …where it is nice and steep i.e. 35 degrees +