We are starting to see the unsettled weather “settle in” day by day now with warnings in place for Saturday and more to come during the week. 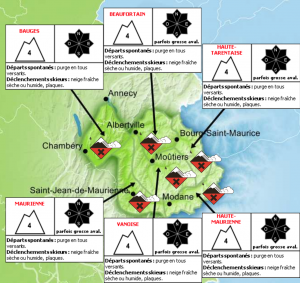 Meteo France has not only put the danger rating up to level 4 for Saturday but they have also issued a general “vigilance” for the Savoie advising about problems with travel to the area and risk of spontaneous avalanches which might even affect some roads.

Translation of the Bulletin

This is the Haute Tarentaise bulletin, but the situation is the same for most areas in Savoie and Haute Savoie in the Northern French Alps

evening (70-90 cm above 2100 m), and which will become wet lower, or wet and heavy with rain, will be subject to wind in the high mountains. by wind from NW to WNW, forming large accumulations in leeward slopes (including NE to SE). Its adhesion to recent snow (especially when it is cold and light) will be weak, and its weight can be enough to trigger wind slabs, formed by strong winds from SW to South with Foehn then NW.

Natural departures: The risks will become more serious as the snow falls, in all slopes, in the form of flows then avalanches gradually larger, powdery dry snow, or in the weaker wind slabs in high mountains. Some large avalanches can occur, especially on lee slopes.

Some avalanches can reach roads, especially when the snow becomes wet then the rain will weigh down the layer of fresh snow that has become thick. Accidental releases: A skier will also be overloaded enough to trigger avalanches in most slopes.

Stay safe, travel safe and be careful.  There will be fun to be had as well.