Henry tells about the likely avalanche risk and things to look out for tomorrow and the day after. This includes his observations after skiing today. He discusses why and how the danger rating can drop from a level 5 to a level 3 in just 2 days.  After all the snow, the risks turn from being large scale and widespread and threatening the town (level 5), to large-scale and widespread but mainly on the mountain (level 4), to being localised to specific places (level 3)

What is interesting when you read the bulletin is that they say the risks exist in some very specific places on West facing slopes and above 2200m. However, they say if you did trigger a release high up, it is likely to be huge with a 2m crown break.  This means the avalanche would be devastating. 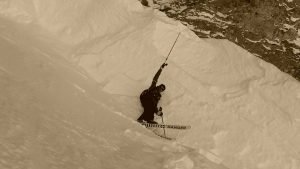 We have noticed before that with a thicker snowpack, once the weather settles and the snowpack stabilises, avalanches release in fewer places than with a thin snowpack. However when they release they are much bigger and more dangerous.

The Avalanche Bulletin for 11th January 2018 for Haute Tarentaise

The abundant snowfall brought 150cm to 1800 meters in 36h with thunderstorms and the wind from the East. This snow fell onto a snowpack that was fairly well stabilized below 2200 meters and still little changed above 2200 meters (less thaw and more wind).

The natural hazards of avalanches become low in most shaded orientations. When facing south (and SW), perhaps be wary of a sudden release, which can quickly take on significant proportions given the layer in place.

Above 2200 meters, the plates are very thick, difficult to leave but if it does, the breaks can exceed 2 meters, especially towards the border masses and in orientations W to NW. Fragile old or newer layers (snow pellets storm) can explain the “random” side of triggering causes on steep to very steep slopes.

Avoid group skiing or grouping in the slope, take good safety distances as soon as the slope is right. (Thierry Arnou)

Why is the snowpack stabilising so fast?

There are many reasons. But one is

Well we had some mild weather during the storms. This has purged many formally unstable slopes. the humid snow bonds very well. This happens much quicker and stronger than in dry cold snow (most accidents happen when a victim triggers dry slab Avalanches)