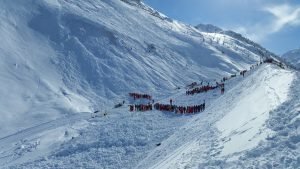 Rescue services and helicopters quickly arrived on the scene this morning after a 400m wide avalanche was released on the Lavachet wall in the Toviere sector of Tignes this morning around 10:30am.  So far six people have been removed from the debris but, sadly, only two of the six have survived.  The death-toll is expected to rise as the chances of survival for the three remaining victims are very slim.  According to official reports the group were on holiday in Tignes and were skiing with a professional instructor.  Our thoughts go out to everyone affected. 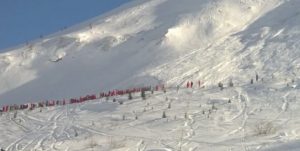 Search party after Avalanche in Tignes

The current risk of avalanche is 3 on the scale of 5 and this incident, on a North-West facing slope, comes on a relatively warm morning after several days of strong winds. Météo France’s official avalanche report (below) notes the risk of rising temperatures and the presence of wind slabs on North, West, and Southerly aspects.

Radio Val have issued a report which we have translated here

The avalanche occurred before noon. A group of 8 skiers accompanied by a Tignes instructor who was a very good surfer, was descending off the slope of the Avacher when a first avalanche occurred causing a crown break of more than one meter.  From what we have observed, over a length of at least 600 meters and a width of 300 meters. The place is well known to lovers of freeride and powder but it is also renowned for its danger.

The locals remembered Georges Simon, who had gone to the same place at the end of the 80s. The avalanche, in fact, buried the skiers at the bottom of a gully where the snow accumulated, This is a terrain trap since the snow could not escape elsewhere. This gully is created by a very large man-made slope that deflects the avalanches and protects the houses below. As a result, the amount of snow at the foot of the avalanche was very deep, so much so that the 6-meter probes were not long enough to get to the bottom of the snow mass. According to rescuers, there would be at least 8 meters of snow.

More than 200 people, both instructors, patrollers and public were on hand to carry out the probing and rescue. The work is very tiring, half of it probed while waiting the relay of the other. The rescue trackers in Tignes, along with their dogs, as well as 2 dogs masters and 3 trackers from the Val d’Isère Ski Area and avalanche dogs from other stations, were present to carry out the research at the same time.

By 2 pm, the rescuers had extracted 4 lifeless bodies from the snow. The rest of the group has not yet been found. The rest of the operations will consist of removing snow with the piste groomers. After that, the rescuers will carry out research with transceivers and probes to locate the victims who remain buried.