In this off piste snow report, with no fresh snowfall since November, decent off-piste conditions are becoming very tricky to find, although not impossible if you’re prepared to walk and really know where to look. Anything remotely near a ski-lift is now tracked out.

The best snow coverage is on N’ish facing slopes above 2300 m, where you can find snow-depths of anything between 65 and 140 cm. To find any good off-piste, you will need to use touring skis and skins. ‘Couteaux’ or ski crampons are also very adviseable on icy areas between 2200 to 2400 m. Above 2500 m, the snow is better and we can still find occasional areas of cold snow, but this is lying on top of a cohesionless ‘sugar snow’. 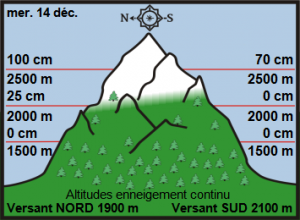 Below 2000 m, there’s a lot less snow. and the avalanche risk is currently very stable (around 1 on the European scale). The snow here often has a 10-20 cm crust (due to melt-freeze) which is lying on a base of cohesionless ‘sugar snow’. Higher up, areas of old windslab are also transforming into ‘sugar snow’ or ‘gobelets’, during the cold December nights. Areas of compressed powder have also transformed into sugar snow. This will constitute an extremely dangerous layer when fresh snow falls. See Henry examining the snowpack on our video.

Down at 1800 m,  the snow depth is only 5 cm, or virtually non-existent. (Snow cannons and pisteurs have been working hard, and you can still ski to lower levels on the piste).

The snow has been very wind-affected. Between 2100 & 2500 m there’s generally a surface crust on high N’ish facing slopes, and on sunny S’ish facing ones. On sunnier slopes, this crust often softens up as the day goes on. On N’ish facing slopes below 2100 m the snow is more deeply crusted. 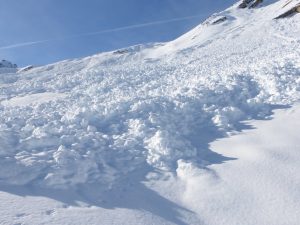 We’ve heard multiple stories of people being challenged by very difficult conditions at the end of their off-piste tour. As well as lack of snow coverage, there are some treacherously icy conditions as you head down to lower altitudes (due to snow melting by day and re-freezing overnight). You may also find yourself having to scramble across difficult terrain, including hardened debris from old wet snow avalanches.

Thursday 15th December: Sunny all day. A light Foehn wind. This could gust up to 30 km/hr near the French/Italian border as the day goes on. Remaining mild: 0° C at 2100 m.

No sign of any new snow until the New Year at the moment.  We keep getting false promises from the weather models, but nothing we can rely on yet. Fingers crossed for January.

Just to re-inforce last week’s tip: Make sure you know your exit route when you head off-piste. Not only could you run out of snow. There are also some treacherous icy conditions lower down the mountain. Once you get down to 2500 m, make sure you have a good cut-out exit before you get into a potentially very dangerous situation.

Meteo France are now publishing their official avalanche danger ratings – see them on www.meteofrance.com/previsions-meteo-montagne/bulletin-avalanches, entering the mountain area of your choice.

Have a great time on the mountain everyone!