Settled weather and sunshine for the next week

Snow depths have improved dramatically, and there’s some very nice quality off-piste on slopes sheltered from the wind. The biggest factor on slope safety and snow quality right now is the wind and the presence of fresh snow or unstable windslabs. 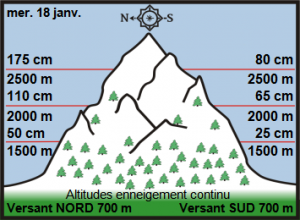 Off Piste Snow Depths by Meteo France for the Haute Tarentaise

Off-piste snow report for 19 to 25 January

Great to see everything looking white again after last week’s substantial snowfall! We could still do with more snow below 1800 m, but the picture is looking much brighter for ski resorts in the N French Alps.

There is some fantastic cold, dry, light winter snow to be found in places sheltered from the wind. This is the best snow we’ve skied all season, even though caution is required (see below). With a sunny week and good visibility ahead, we’re looking forward to some great skiing!

Near mountain ridges and along the French/Italian border, the snow has been very wind-affected. It is quite dense, often with windcrust and some areas of windslab to avoid. Very ‘educational’ to ski! When we’ve been in these wind-affected areas, we’ve been trying to stay in the deep rippled snow, which is much easier to get through. Those really smooth looking areas are often full of windslab.

Persistent episodes of strong N and then E wind have transported the snow around the mountain massively. This has caused snow accumulation and areas of windslab to form. That old cohesionless ‘sugar snow’ that we keep harping on about, most prevalent on N’ish facing slopes above 2000 m, is still there underneath the fresh snow.

We need to be very cautious, particularly on steep slopes above 2500 m, where the weight of one or more skiers could be enough to trigger an avalanche. We have seen numerous small avalanches being triggered by skiers in Val d’Isere/Tignes over the last week. Fortunately there have not been any serious consequences that we know of. The avalanche risk is currently around 3 on slopes above 2500 m, and about a 2 below this altitude. It will probably decrease as the week goes on, with more settled weather. 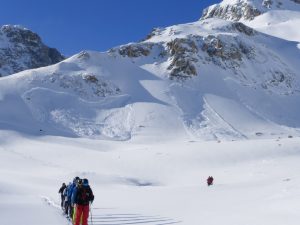 There have also been quite a few natural avalanches (see Wayne’s photo for an example). Most of the natural slides we’ve observed so far have been on steep NE to E facing slopes at about 2500 m. Meteo France warn that we now need to beware of slab releases on a wide spectrum of slope directions, from SE through N to W.

Expect no significant snow before Friday 27th January. There is a low pressure system in the Med but this will deliver a few annoying clouds and wind rather than fresh snow. There may be a bit of snow Sunday night. But will not be much. The weather will be mainly sunny. But from Sunday 29th January the weather looks likely to change in a big way. The high pressure will finally withdraw and allow NW Atlantic weather systems to deliver a much more unsettled and stormy environment.

Detailed snow and weather forecast for 19 to 25 January

Saturday 21st: Sunny with some cloud near the French/Italian border. Temperatures approaching what we’d expect for the time of season. Light SE to E wind, strengthening up to 50 km/hr in the night.

Sunday 22nd: Mixture of sunshine and cloud. A few isolated snowflakes possible in Haute-Maurienne, near the French/Italian border (e.g. Bonneval, Val Cenis). SE wind gusting up to 50 km/hr near the border.

Monday 23rd: NE wind. Sunny in the mountains, with some cloud banks at lower altitude.

Tuesday 24th & Wednesday 25th: Remaining sunny in the mountains. N to NE wind (up to 50 km/hr at high altitude). Temperatures remaining normal for the time of season.

There is still some lingering instability on steeper slopes, particularly above 35°. When you’re looking to make fresh tracks, be very careful on steep slopes and untracked slopes. Pay attention to where the wind has blown. This affects the quality and safety a lot.

See Meteo France’s daily avalanche bulletins on www.meteofrance.com/previsions-meteo-montagne/bulletin-avalanches, entering your mountain area. These show you the history of the wind direction. They also have a handy diagram showing  you which slope aspects are most at risk.