In this off piste snow report, snow depths are much improved. Drier weather and better visibility are on their way. 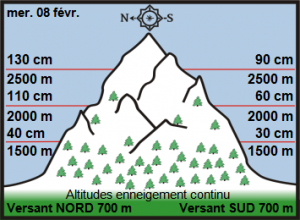 It’s been an incredible week for off-piste enthusiasts with so much light deep fresh snow! Flat light conditions should improve over the next few days as the cloud cover gradually thins out. Snow depths are much improved in all resorts of the N French Alps. They’re now about normal for this time of season.

In wind-sheltered areas at high altitude, there’s still some wonderful light cold winter powder snow to be found, especially on high N exposures. In more exposed spots at high altitude the snow is very windblown, with areas of windslab. Below 1500 m, the snowpack is often humidified, thick and heavy.

We’re due to receive another sprinkling of fresh snow, which will land upon 40 to 60 cm of recent snow which is slowly packing down. The weather will then turn drier. Recent snowpack tests have revealed a layer of cohesionless ‘sugar snow’  buried 50-60 cm down in the snowpack. This constitutes an extremely weak layer under all that fresh snow, that we need to look out for.

We could see some natural avalanches of heavy, humidified snow (possibly even full-depth avalanches). The risk of skier-triggered avalanches increases at higher altitude where the wind has been blowing, causing windslab snow to develop. Above 2200 m, there is plenty of that loose ‘sugar snow’ on slopes facing just about every direction. The weight of a skier passing by could be enough to trigger a slab avalanche sliding over this weak layer.

Things have been pretty stable over the last few days, and we’ve heard of very few avalanche accidents. This could well be due to poor visibility, which may have deterred many people from venturing off-piste. Let’s hope it stays that way when the sky clears over the weekend onwards. With better visibility from Saturday, more of us will probably be tempted onto the more dangerous steeper, higher slopes.

Sunday 12: Dry and cloudy with a few bright spells.

Monday 13: Brightening up as the day goes on. Temperatures still climbing a bit.