We’re expecting up to 50 cm of fresh snow over the next couple of days in the French N Alps. Clearly the snow dance worked! 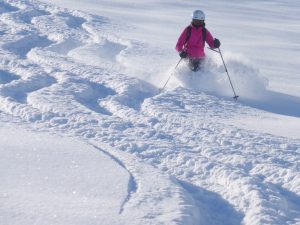 Up to now, small amounts of recent fresh snow (5 cm here and there) have been helping improve the quality of off-piste skiing. There’s been some very nice light snow in sheltered spots and in gullies where it has been blown in by the wind. Aside from hitting the odd rock (ouch!), there’s been some really nice skiing over the last week or so thanks to these little snow showers (see our photos)

However, with the much more substantial amounts of snow due, in terms of avalanche danger, things will change dramatically over the next week. This fresh snow will be accompanied by very strong N-NW winds and will come down on a very weak layer of old snow that is present especially on North facing slopes and more acute the higher the altitude you go.

Up until now, in many spots on North’ish facing slopes, recent snow has been lying on cohesionless snow. This has not been dangerous because of the very small quantities of new snow in each little recent snow storm (i.e. less than 10-15 cm in each little snow storm in most places). However, with the substantial amounts of fresh snow now due, this will form an extremely dangerous snowpack. On sun-exposed slopes the new snow will come down on sun-crusted or wind-hardened older snow which will be less unstable than the weak layer of ‘facets’ or ‘sugar snow’ on North’ish facing slopes. At lower altitudes, the new snow will come down directly in contact with the ground, on a thin layer of recent snow, or on top of  thin snow-drifts  – the result is that at these altitudes, below 1800-2200 m, the snowpack will not be as unstable either. Conclusion: North’ish facing slopes above 2000 m will be the most unstable once they start getting another 15 cm of fresh snow.

In summary, the substantial amounts (in excess of 50 cm) of fresh snow expected, along with the strong N-NW wind, will form a dangerous cocktail of snow accumulations which will form unstable slabs. It will be particularly unstable and unpredictable because of this old cohesionless ‘sugar snow’ most prevalent on North’ish facing slopes above 2000 m.  We have spoken, written and demonstrated what this weak/cohesionless snow is all about over the past few weeks on blog posts, videos on the Henry’s Avalanche Talk Facebook page etc. Now it is being covered with lots of new snow.

Avalanche risk rating moves up to 3

The avalanche danger will rise to a 3 or higher. It will be exceptionally unpredictable too… thanks to this weak layer; for example, a steep unstable slope may not release with the first or even the fiftieth skier, but may release when the sixtieth skier goes (see tip of the week below). 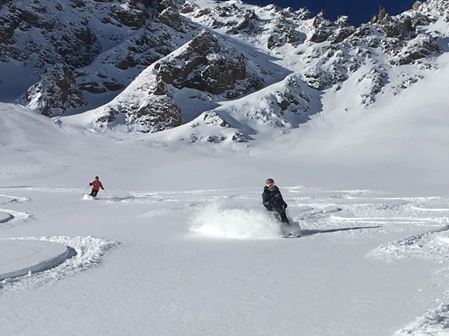 Detailed snow and weather forecast for 12 to 18 January

Friday 13th: After a slight respite from the storm in the morning, light snow showers will begin again. These will continue into the evening right down to the valley bottoms. 15 to 35  cm fresh snow expected in ski resort. Wild NW wind (70-100 km above 3000 m). Very cold overnight, -10° at 1800 m.

Saturday 14th: Extremely cold with a few snow showers in the mountains. Strong N-NW winds at high altitude. Some sunshine poking through the clouds from time to time.

Sunday 15th & Monday 16th: Remaining bitterly cold with N-NW winds in the mountains. Sunny with a bit of cloud.

After we’ve received this fresh snow, because of the unpredictable nature of the snowpack, be very careful on steep slopes of 30° or more, or avoid them altogether! See video below

If you’re in Val d’Isère this Friday (13th), attend our Avalanche Talk at the Arctic Cafe, 6 pm and learn more about the current situation.
Tickets on-line, or on the door, if there’s still space. We’ll be doing more of these during the season.

Ride hard, Ride safe and wrap up warm everyone!