Plenty of Alpine Sunshine over the Festive Season!

After a stormy couple of days near the French/Italian border, things are quickly settling down again. Most of the recent snow fell in the SW Alps, particularly in the Italian Piedmont (e.g. Sestriere). A few lucky high-altitude French resorts near the border, like Val d’Isere and Tignes, benefited from some fresh snow. This snowfall was accompanied by strong Foehn winds though (gusting over 100 km/hr at times). This wind has affected the snow quality a lot, causing windslab formation and snow drifting. Nevertheless, some of these lucky resorts are now enjoying some fresh snow to play with in dips and gullies at high altitude. Lower altitude resorts continue to struggle from limited snow coverage. 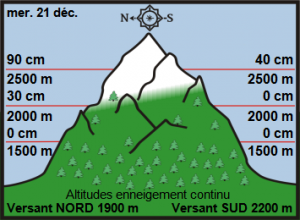 Decent off-piste snow coverage can really only be found above 2000 m on N’ish facing slopes and 2500 on S’ish facing ones. Apart from the few nice gullies containing fresh cold powder snow in high altitude areas near the French Italian border, off-piste conditions are currently pretty tricky. The snow is often very windblown, hardened, or very smooth and slick. Ski touring is still really the only way to find any decent snow. Ski crampons are very useful, allowing your skis to get a firm grip when skinning on this hardened snow.

There is still some deep sugary snow around, particularly on N facing shaded slopes above 2000 m. This snow lacks any cohesion. If you take off your skis it’s a bit like standing in quicksand. On its own this loose snow (faceted grains) is very stable and pleasant to ski. However, as soon as we receive 16 cm or so of fresh snow, this will become a dangerously weak layer. Watch Henry examine this weak layer last Friday 16th December.

Until we get any substantial fresh snow, the snowpack remains pretty stable. The avalanche risk’s at 1 on the European scale, or at 2 in isolated areas above 2500 m, where the recent Foehn wind has caused formation of windslab, and snow accumulation. In isolated steep areas it could take just one skier, or a group, to trigger this windslab. 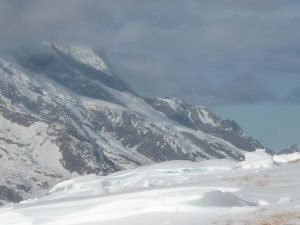 Friday 23: Continuing to be sunny in mountain areas and high valleys, despite some high cloud. Light W winds on mountain tops. 0° C between 2400 and 2700 m.

Saturday 24: Passing high cloud, sometimes closing in over mountain tops. Below 2000 m, there may be a bank of thicker cloud. Wind turning N to NW, up to 50 km/hr at altitude. Temperatures falling.

Sunday 25 & Monday 26: Saturday: Becoming brighter as Christmas day goes on. Breezy at altitude and in exposed areas. Fluctuating temperatures. Sunday: Back to sunshine in mountain areas. Temperatures rising again as the day goes on.

At the moment there are no signs of new snow in the Tarentaise or any of the French Alps in the next two weeks. There may be some fresh snow in Austria and the Eastern Alps.  This could come after Christmas or is strongly indicated for 2nd January.  We will update you as things progress.

There will be a lot of sunshine, cold nights to protect the existing snow and warmer daytime to enjoy skiing.  So all is not lost.  Happy Christmas.

Beware of triggering windslab on high steep N facing slopes near the breezy French/Italian border. Lower altitude and S facing slopes are more stable, although the snow quality won’t be so good there!

Happy Christmas, everybody! Enjoy the sunshine and have a great festive season!