In this off piste snow report, there’s a real change in the weather this week. Wild N winds, bitterly cold temperatures and maybe a little bit of fresh snow. 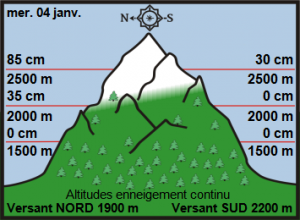 The best snow coverage continues to be on N’ish facing slopes above 2300 m. To find any decent off-piste, you will need to use touring skis and skins. Above 2500 m, we can still find occasional areas of cold snow, which is often lying on top of a cohesionless ‘sugar snow’. Below 2000 m, there’s a lot less snow (if any). 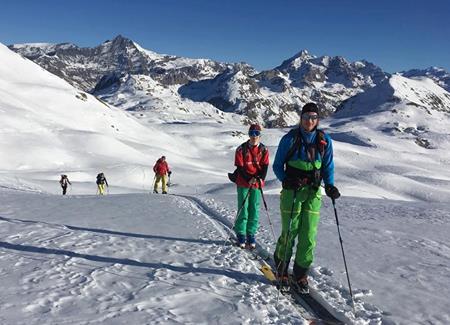 Ski touring continues to be great fun and is definitely the way to go at the moment!

High-altitude resorts like Val d’Isere, near the French/Italian border, continue to fare better than most of the other French resorts. Even so, we all badly need a good dump of snow. We doubt if the small amount of dry, light snow expected will make a great deal of impact on improving the situation. However, it could provide a nice cushion in some sheltered spots. Accompanied by strong N winds, it will also cause areas of snow accumulation and build-up of windslab that we need to be very aware of.

The avalanche risk is currently very stable (around 1 on the European scale). It will shoot up as soon as we get any significant amounts of fresh snow. Until then, the main danger for off-piste skiers is of falling and sliding on the steep icy slopes on the wind-hardened snow. Couteaux’ or ski crampons are highly advisable, There is a very real risk of falling and sliding, especially on steep icy slopes. There is also a danger of running out of snow as we descend to lower altitudes, there are now rocks and other obstacles to watch out for as the snowpack becomes thinner.

At the moment the weather models are suggesting a bit of snow on Tuesday.  But then there is likely to be a change in the weather pattern with the blocking anticylcone starting to weaken and allowing some low pressure and weather fronts to move in from the North West.  So we are quietly hopeful of more signifciant snow and very cold temperatures starting on 13th January.  Both the European and American weather models are suggesting it this morning.  It is still too early to be sure, but the signs are encouraging.

Detailed snow and weather forecast for 5th to 11th January

Thursday 5th January: Following a night of high N winds accompanied by small amounts of snow (1 to 5 cm), the day will start with a few residual snow flurries. Flat light conditions for skiing will predominate first thing. Brightening up as the day goes on. In total contrast to recent weeks, it will be much colder than normal for the time of season: – 10-12°C at 2000 m. Blustery N-NW wind gusting up to 100 km/hr. Bitterly cold overnight temperatures: down to -16° C at 2000 m.

Friday 6th: N wind with gusts up to 70 km/hr at high altitude. Remaining cold. Sunshine returning to the mountains with some high cloud. Freezing fog below 1000 m.

Saturday 7th: N wind, gusting up to 50 km/hr. Sunshine and cloudy intervals, which will sometimes thicken and close in over mountain summits. Remaining very cold.

Tuesday 10th: Sunshine with wispy high clouds in the morning. Cloud thickening in the afternoon. Possibly (hopefully) some light snowfall overnight, but probably no more than 5 cm. NW wind, 30-50 km/hr.

Wednesday 11th: A mixture of cloud and bright spells, with some residual snowflakes floating around. Colder again.

The biggest hazards seem to be on piste at the moment.  There have many an unusually large number of collisions and on piste accidents.  Pay attention to other people and move consistently and steadily through any crowded pistes.  Off piste, stay under control, watch your speed on the icy steep slopes, and stay on your guard for rocks lurking under the surface.

Meteo France are now publishing their official avalanche danger ratings – see them on www.meteofrance.com/previsions-meteo-montagne/bulletin-avalanches, entering the mountain area of your choice.

Keep doing that snow dance everyone. This week’s snow may help a bit but we still need loads more!