Sunny weather for a few days, followed by more snow from Tuesday onwards! 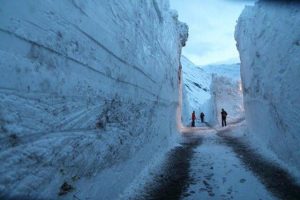 Bonneval Sur Arc.Photo from Meteo-Alpes FB page. If that’s what it’s like at road level, imagine how much snow fell higher up!

It’s been a incredible week in the N French Alps with insane amounts of snow falling in Savoie close to the Italian border! This was accompanied by gale force E winds, chaos on the roads, avalanche risks of up to 4 and even 5/5.  Areas were put on ‘lock-down’ by the authorities, when it was too dangerous to even leave your building.

A round up of photos from resorts who experienced a ‘retour d’Est’ phenomenon can be seen on  www.skipass.com/news/157917-retour-d-est-le-bilan.html. Val d’Isère was one such resort, receiving 2 m of snow in 48 hours.

Although the snowpack has been consolidating quickly, we still need to be very careful in some ‘localised’ areas. Henry and the HAT team will try to be more specific about where these areas are expected to be. Check out our updates on Henry’s Avalanche Talk Facebook page.

One thing we currently need to look out for, is areas of thick windslab that has especially formed on leeward W to NW facing slopes near ridges along the breezy French/Italian border. If you’re going off-piste in these areas, leave plenty of space between each other as you ski, go one at a time, use ‘islands of safety’ and be especially careful to avoid terrain traps below.

There are currently some awesome off-piste conditions, with great powder snow above 1800 m, which is very deep in places. Over the next few days with the colder temperatures and good visibility, the off-piste should remain good.

If we receive a significant amount of fresh snow on Tuesday/Wednesday, the avalanche risk will rise again. Check the danger ratings on the Meteo France avalanche risk bulletins for your area. 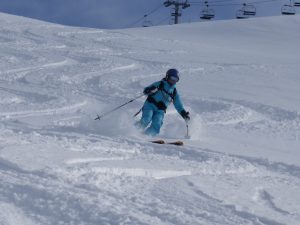 Friday 12th: Fantastic off-piste conditions! Bright, sunny and cold. Temperatures down to 0° C at 800 m. Light E to NE wind at altitude. Possibly some mist on mountain ridges along the French/Italian border.

Tuesday 16th & Wednesday 17th: Unsettled weather coming in, and back to snowfall in the mountains! Tuesday: Cloudy with snow falling above 1500 m (rain lower down). Wednesday: Snow showers above 800 m altitude. Maximum temperatures: 3° C at 1000 m.