Another snowy week ahead ! 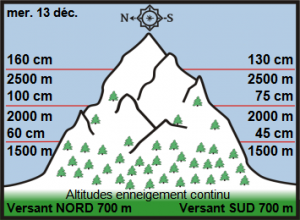 Snow depths have increased dramatically over the last week. In the Haute Tarentaise area of Savoie (e.g. Val d’Isere/Tignes) there’s now about 160 cm snow on N facing slopes above 2500 m. And it looks like plenty more snow will be falling in the next few days!

Earlier this week, we received over 60 cm of fresh snow in the space of 24 hours. Along with these huge depths of fresh snow, temperatures then rose to above 0° C at 1800 m. There were numerous natural slides/avalanches on steep slopes. In many resorts, preventative ‘avalanche blasting’  to protect the ski areas saw some spectacular results. See examples on www.data-avalanche.org and social media.

Henry predicts that, despite its causing initial instability, the warming trend should go some way towards helping to stabilise the snowpack. The more humidified snowpack below 2200/2300 m will start to consolidate more as temperatures fall below 0° C. Caution though: Areas above 2300 m, where temperatures stayed colder, will not have benefited from any stabilising.

The fundamental instability in the snowpack is the weak layer that developed during 2 weeks of very cold temperatures at the end of November/beginning of December (-15° C or so at 2000 m). Those cold temperatures transformed the then thin snowpack into a ‘sugary’ incohesive layer of ‘facets’ or ‘depth hoar’. That weak layer is still there, particularly at higher altitudes, with lots of more recent snow lying on the top of it.

With so much fresh snowfall on top of an unstable base layer, the avalanche risk has been high and we’ve been sticking to low angled slopes of 30° and less (about the gradient of the steepest part of a ‘red run’ in Europe). We’re also making absolutely sure there are no terrain traps, cliffs etc, below us, and looking out for evidence of recent avalanche activity. See our previous blog: No Risk Zone Off Piste.

There have been a few accidents where people have been caught out by skiing steeper slopes, and have triggered slab avalanches. However, many other people have skied steep slopes and ‘got away with it’. Most of the time, you can do this and nothing happens…. but that doesn’t mean it was a good decision call. It’s a common mistake to be led into a false sense of security by following other people’s off-piste tracks, assuming all will be well…. not always the case.

Off-piste conditions will continue to be quite variable over the next few days. There are some lovely areas of cold powdery snow, particularly in gullies and sheltered couloirs. In many places, it is very wind-affected (hardened or densified). At lower altitudes the snow is quite dense and humidified (difficult to ski). The danger of hitting rocks is obviously not such a problem as it was (even though there are still some around!).

Strong winds at high altitude will be causing areas of windslab snow to develop, along with areas of snow accumulation in leeward areas. The avalanche risk will be around 3 on the European scale of 5.  See what the avalanche danger ratings mean on henrysavalanchetalk.com/hat-advice/danger-rating. The weight of a skier passing by could be enough to trigger a windslab avalanche – be particularly wary of leeward slopes above 2200 m. 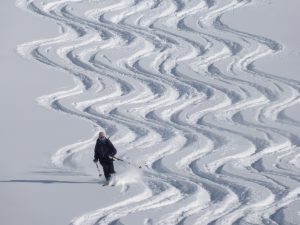 Friday 15th:  After a brighter morning, snow showers will resume in the afternoon, with the rain/snow limit dropping to 500 m as temperatures fall. Anything between 10 to 30 cm of snow expected. W wind, 40 to 60 km/hr, above 2500 m.

Sunday 17th & Monday 18th: Sunday: a short-lived high pressure weather system coming in, bringing sunshine. 0° C at 1400 m.
Monday: Back to snowfall, which will become more generalised as the day goes on, continuing into the night.

Tuesday 19th & Wednesday 20th: Sunny at higher altitudes, cloudy in the valleys. N to NE winds. Temperatures normal for the time of season.

Meteo France are now producing their daily avalanche bulletins. Check them out before you go off-piste on www.meteofrance.com/previsions-meteo-montagne/bulletin-avalanches.

If you’re in Val d’Isere this Monday, please come to Henry’s avalanche safety talk with Shred Safe: It kicks off at 3 pm on Monday 18th December in Arctic Juice & Cafe  on the Snow Front opposite Mattis Intersport. Shred Safe, the Arctic Juice & Cafe and ORTOVOX are sponsoring this event, so there is no charge. Entry is free.