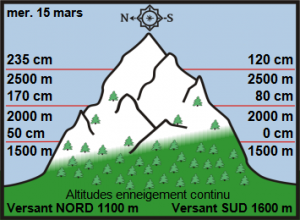 With recent very mild temperatures the thick layer of recent snow has stabilised remarkably quickly. Spring conditions are currently here. Surface snow is humidified at altitudes below 2700 m on colder NE to NW facing slopes, and below even higher altitudes on the sunnier E to S to W facing slopes. It is generally crusted in the early morning due to overnight refreeze. Then it softens up in the sunshine and we’ve been finding some beautiful soft spring snow to ski in. Above 1800 on N facing slopes, it is still colder deeper into the snowpack.

These nice skiing conditions could change over the next few days, as it becomes cloudier, with less transforming of the snow in the sunshine and possible lack of/minimal overnight refreezing.

Mild temperatures for the next couple of days will lead to the snowpack becoming more and more humidified. We could see a few natural avalanches occurring, especially on sunny E to S to W facing slopes, mainly in the form of superficial slides. A few glide cracks are starting to appear, particularly on E and SE facing slopes above 2200 m. A single skier could set off a slide of heavy humidified snow. There is some recently formed windslab near mountain tops and ridges (caused by strong N’ish winds), which could be triggered by a group of skiers passing by.

Being optimistic, if we receive small amounts of fresh snow at high altitude, that should give us a nice little cushion to ski on, and changed conditions again. If the quantities become more significant, though, the avalanche risk will rise again. Check out the daily avalanche bulletins from Meteo-France before you go off-piste. 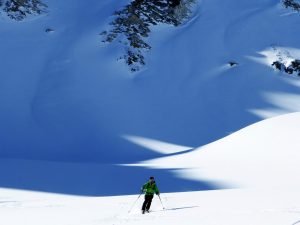 Spring skiing has been great this week. Wayne Watson photo

Friday 17: Sunny and very mild, with some excellent spring skiing conditions. Cloud will start to appear and thicken as the night goes on. There could be a few drops of rain (or flakes of snow above 2000 m). 0° C at 2700 m in the day and at 2000 m during the night (so minimal refreeze).

Saturday 18: Thick cloud, thickening even more during the night. Some precipitation with extremely light snowfall (less than 5cm) down to 2000 m, mostly in the afternoon. This will die out as the night goes on. Strong NW wind at very high altitude, with guests up to 100 km/hr above 3500 m. 0° C at 2500 m.

Sunday 19 & Monday 20: Sunday: NW winds will die down and turn SSW. Brightening up as the day goes on. Temperatures on the rise again. Monday: Mainly sunny with S to SW wind, and a few gusts of Foehn and Lombard. Becoming even milder: 0° C at 3000 m

Be wary of steep N’ish facing slopes above 2500 m – especially if we get much snow over the weekend.

See the Henry’s Avalanche Talk Facebook page – we have lots of great info and updates on events that can help you to have more fun off-piste! See: facebook.com/HenrysAvalancheTalk