More high winds and snowfall ahead!

Wild weather continues in the N French Alps, with high winds and plenty more snowfall to come! We could see a brief calm and sunny spell next Tuesday/Wednesday.

Snow depths are almost unbelievable for this time of the season for much of Savoie and Haute Savoie. No matter what the locals say about it being like this all the time in the past, this season’s levels of snow will almost certainly be going down in the all-time records, especially in the higher resorts. Val d’Isère, for example, already has about 5.5 metres of accumulated snow at 1850 m, which is reaching averages of snowfall for an entire season… and we’re only in mid-January!

When we’ve been able to get out onto the mountain, there’s been some great snow on slopes protected from the ravages of the wind. It’s always worth venturing out because, even if the weather looks terrible from your window, conditions may be better than you think. Do listen to the warnings from the piste patrol services, though.

With a lot more snow, sometimes rain, and high wind over the next few days, we’ll see a lot of snowpack instability. The avalanche danger rating will likely be often at 4 depending on how much snow and wind we get. (Except the department of Isère, where it will be around 3 unless they get more snow). See definitions of the avalanche danger ratings on henrysavalanchetalk.com/hat-advice/danger-rating.

We’ll no doubt be seeing a lot of naturally occurring (‘direct action’) avalanches during, and just after the storms, due to all this precipitation. Some of these avalanches will probably be large, and could be either powder or slab avalanches. At lower altitudes, where the snow will be wetter and heavier, these avalanches could come down to road level. Roads will sometimes have to be closed again by the authorities while the slopes above are being secured. The piste patrol services will continue to have a monumental job in securing the ski areas.

The weight of a single skier could sometimes be enough to trigger a windslab avalanche. High East facing slopes in the lee of the Westerly winds are most vulnerable. See our weather and snow stability updates on Henry’s Avalanche Talk Facebook page. 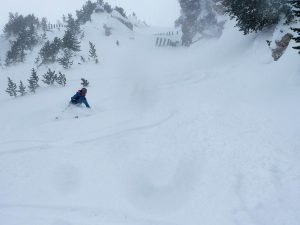 Thursday 18th: Snow will continue falling all day above 1400 m (it could be raining below that altitude, with temperatures becoming milder as the day goes on). Possibly 25 to 45 cm fresh snow around 2000 m. W to NW winds, gusting between 80 to 100 km/hr above 3000 m. Thick cloud cover and poor visibility.

Friday 19th: Lighter snow showers throughout the day at altitudes down to 800 m. Another 10 to 25 cm of fresh snow expected at 1500 m. Again, this snowfall will be accompanied by strong gusts of NW wind, up to 100 km/hr at higher altitudes above 3000 m.

Saturday 20th: Snowing again all day long in the mountains. High W to NW winds, strengthening as the day goes on with gusts up to 120 km/hr at 3000 m.

Sunday 21st & Monday 22nd: Sunday: Continuing to snow above 2000 m (could be raining below this altitude). Very high NW wind at higher altitudes. Monday: Still snowing above 1800 m, but this will die down a little. Wind also becoming lighter. Temperatures normal for the time of season.

Tuesday 23rd & Wednesday 24th: Sunshine at last! A much calmer spell of weather (although this could be short lived – there may be some more stormy weather coming in on Thursday).

The big topic this week is the weather. Any instability in snowpack this week will mainly be related to the continuing snow storms. We’ll be closely following this, and doing regular Facebook updates about snow stability. See www.facebook.com/HenrysAvalancheTalk

And don’t forget to check the Meteo France avalanche risk bulletins for your area.