A snowy week ahead! Watch out for steep North-ish facing slopes. That’s where most avalanche instability will be. Some great conditions though! 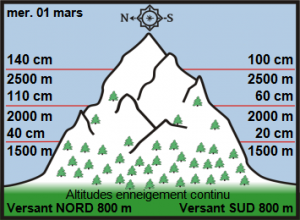 Winter is back with plenty of fresh snow, and still more to come! Over the last few days we’ve been experiencing some of the best powder skiing of the season. The quality of the fresh snow is better above 2000 m, where it is lighter and drier. Deep cold powder! At lower altitudes, especially with the milder temperatures ahead, the fresh snow is more humidified, heavier and trickier to ski.

Unfortunately, the fresh snow is often being accompanied by howling winds. New areas of windslab snow continue to form. Some natural avalanche activity has been observed on steep N facing slopes, where the fresh snow is lying on top of weak layers of  ‘sugar snow’. As the wind has been so strong, this windslab snow can be found at different altitudes, even towards the bottom of the slopes. See Alain Duclos’ video for an excellent demonstration of the weak layer beneath more recent snow, and how a slab avalanche can occur. Of course, there’s even more fresh snow around now!

The main risk to off-piste skiers over the next few days will be of triggering a slab avalanche. This may occur where a fresh layer of snow has landed on top of recent snow which has not yet had time to stabilise. Or the slab could be buried underneath the recent powder. It could be 50 cm or more thick. Steep N to NE facing slopes seem to be most at risk. The avalanche risk over the next few days will be about a 3 on the European scale of 5: a ‘considerable risk’.

With more snow forecast (possibly rain at lower altitudes) along with mild temperatures, we could also see some natural avalanches of heavy humidified snow on steep slopes. 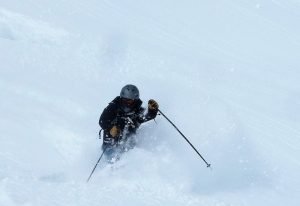 Friday 3: W to SW winds. 0° C at 2500 m. Bright morning. Clouding over in the afternoon, especially near the French/Italian border. The Foehn wind will start to blow in the afternoon , with gusts of 50 – 70 km/hr. Very high winds during the night.

Sunday 5 & Monday 6: Unsettled, snowy and mild. Sunday: Light snow showers down to 1200 m, becoming heavier as the day goes on. Monday: Remaining very unsettled, again with snow down to 1200 m.

Watch out for steep N’ish facing slopes (NE through N to NW). These will be particularly unstable for the next few days.

Avalanche forecasts for most regions in the N French Alps are currently emphasizing this.