Sunny and mild conditions for Christmas week in the Alps! 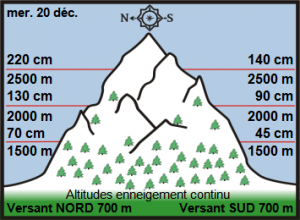 With the milder temperatures and sunshine predicted in the week ahead, this will become heavier and tricker to ski. There should still be some great snow on shaded high N facing slopes though. Wind will play a factor, as always, causing exposed surface snow to become hardened and crusted. On sunny S facing slopes below 2000 m, the snow will become quite crusted at the surface.

Areas of windslab have been formed by the recent high NE winds. Be especially wary of NW to W to SW facing slopes above 2800 m, that have been very wind-affected. Also beware of areas near ridges, and the windy French/Italian border.

The deeply-buried weak layer of depth hoar (‘sugar snow)’ persists, particularly on high cold N facing slopes. These have been less affected by the stabilising effect of recent warmer temperatures.

We’ve been seeing surprisingly little recent avalanche activity recently, despite Meteo France’s predictions of an avalanche rating 3 or even 4. (See the daily avalanche bulletins on www.meteofrance.com/previsions-meteo-montagne/bulletin-avalanches). Indeed, nothing happens most of the time. But it’s important not to take that as a green light for ‘no danger’. Many people have been skiing very steep high slopes, and ‘getting away with it’. ‘Nothing happens’ doesn’t mean the decision to ski that  slope was a sound one, though.

It’s extremely tempting, and only natural, to see other people’s ski tracks as a reassuring sign. It would be easy to deduct that someone has skied down a slope before, so all will be well.

See Henry’s ‘Facebook Live’ report earlier this week. Henry was having an awesome off-piste morning, in a danger rating of 3. He realised how easy it would be to let down your guard and to stop applying risk assessment and basic risk reduction measures, because there was little evidence of avalanche activity and nothing bad was happening.

There’s a very enlightening account (in French) of an avalanche accident in Courmayeur, Italy, earlier this week. Here, an avalanche was distance triggered from 200 m above, on an off-piste slope. The slope had at least 30 tracks on it. Ski schools were there. Everything seemed pretty stable. The victim was applying good off-piste etiquette. He triggered his airbag but it became punctured on some bushes. His very brave account can be found in French on www.data-avalanche.org, 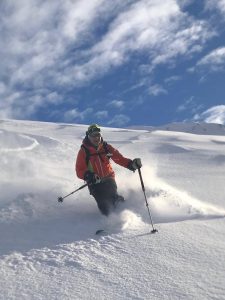 Thursday 21st: Beautiful sunny day in the mountains. Milder temperatures with 0° C at 2500 m. N to NE winds, with gusts up to 60 km/hr at high altitude.

Sunday 24th & Monday 25th: Happy Christmas! Remaining sunny and extremely mild in the Alps. Up to 7° C at 1000 m. Cloudy and foggy at lower altitudes.

Tuesday 26th & Wednesday 27th: A stormy period of unsettled weather coming through. Snow in the mountains, with rain lower down.
Maximum temperature 5°C at 1000 m.

Keep it safe and keep applying risk assessment and reduction methods. You can greatly reduce the chances of having an accident (and have more fun) off-piste with our simple downloadable Off-Piste checklist.

See our basic framework of risk assessment and reduction methods in our previous blog: www.henrysavalanchetalk.com/off-piste-quick-reference.