A mixed bag of weather this week, with mild temperatures. 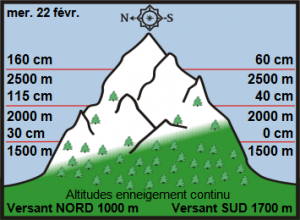 Off Piste Snow Depths for the Haute Tarentaise by Meteo France

Snow depths are below average for the time of season, with higher-altitude resorts faring best. We can ski down to around 1200 m on N facing slopes and down to around 1800 on S facing ones. Ski touring, using skins, is really the best way to find any good off-piste snow at the moment.

The best quality snow can be found on N’ish facing slopes above 2200 m, but you need to search hard to find it. The quality often depends on how much it has been wind and sun affected. The wind has often densified the snow, making it very stiff and quite ‘educational’ to ski. There is sometimes a bit of crust on the snow surface when it has humidified in the sun and then refrozen. There are still some patches of cold winter powder on high shaded N facing slopes, but they are getting much harder to find. We’ve been aiming to ski in strips of dimpled snow (ruffled by the wind) which is less stiff and easier to turn the skis in!

With continuing warm temperatures, conditions are becoming quite spring-like. There’s often some very icy snow first thing (after the overnight refreeze). Ski crampons are very useful when we’re skinning on the icier traverses. On S’ish facing slopes, we’re now often finding some very pleasant soft  ‘spring’ snow by the end of the morning.

Much of the snowpack has started to settle down thanks to the sunshine and warm temperatures. Daytime melting and overnight refreezing are helping to stablise the snowpack on most of the mountain. However, snow on the more shaded, colder N facing slopes above 2200 m has been transforming into that cohesionless ‘sugar snow’ again. We’ll have to look out for this when we receive another substantial snowfall. This loose snow will constitute another weak cohesionless layer under any fresh snow.

The risk of naturally occurring avalanches is pretty low due to the low snow depths, and because many of the couloirs and steep slopes have already purged. With the warmer temperatures over the next few days, there could be a few full-depth avalanches of heavy, humidified snow. These will mostly be happening on the warmer E, S and W facing slopes.

The risk of skier-triggered windslab avalanches currently remains low, and is mainly limited to N’ish facing slopes above 2200 m, especially those wind-affected areas near the French/Italian border. These are the sun-shaded, colder slopes which are not stabilising like the warmer sun-affected slopes. 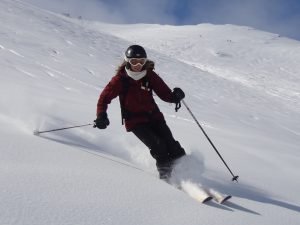 Watch out on steep N facing slopes. This is where the best snow is to be found, but also where the most instability will be if we get much fresh on top of that weak layer of “sugar snow”.