A little more snowfall expected, and sunshine on Sunday/Monday! 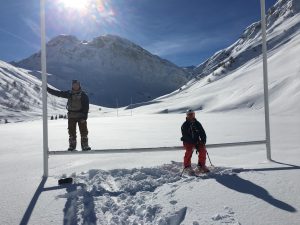 Snow depths above 1800 m are now at record levels in Savoie and the N French Alps – in excess of depths that we’d expect for the end of March, not January!

There is a mixed bag of weather for the week ahead, with a little more snowfall and a couple of sunny days too.

We’re finding a variety of off-piste conditions out there at the moment. On slopes below 1800 m, the snow is often very humidified thanks to mild seasonal temperatures and rain. The snow quality is better above 2300 m where it is usually drier and lighter. It has sometimes been quite wind-affected though, with some snowdrifts around. As is often the case the best snow is in the lee of the wind. But this could also be the most dangerous slope, so you need to apply basic risk reduction measures outlined in the framework/checklist and assess the risk every time.

On warm sunny slopes we’ve sometimes come up against crusted surface snow first thing in the morning, due to daytime melting and overnight refreezing. This can be tricky to ski, and we’ve often needed our wits about us to avoid badly twisting a knee.

There have been a lot of shallow depth avalanches where the top layer has gone (crown fractures of mainly 10cm to 30cm only a very few bigger/deeper). These may not be as severe, but you could get a very nasty injury if caught by them.

Many slopes below 2000 m have now purged. Natural avalanches above 2000 m are also becoming less common, although there is still potential for large avalanches to come down from higher up, particularly on steep sunny slopes. We’ve seen a lot of these in the last few days.

We have a very thick snowpack with no significant, delicate weak layers to highlight anymore. This means the risk of skiers triggering a windslab avalanche is currently quite small, but it can still happen. If it does happen, the volume of snow releasing on steep slopes is likely to be very large. We need to particularly be aware on the more wind loaded E and S facing slopes, and ski one at a time or with reasonable distances (20 – 30 metres apart on steep slopes for example).

The bulletin highlights slopes that are vulnerable each day. 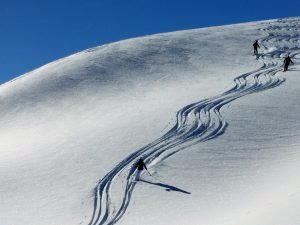 Friday 26th: Cloudy with some snowfall expected. Up to 30 cm fresh snow in the Haute Maurienne area near the French Italian border (Bonneval, possibly Pissaillas glacier above Le Fornet, Val d’Isère). Less than 15 cm expected elsewhere in Savoie. Strong SW – S wind at high altitude, calming down, turning SE at night, except for on the highest summits. 0° C at 1400 m near the French/Italian border and around 1700 m in areas affected by the milder Foehn wind.

Saturday 27th: A cloudy day with a few more snowflakes falling at times. Moderate to strong SE – E wind on the highest summits, calming down overnight. 0° C 1700 m, climbing to 2000 m in the night, i.e. a poor overnight refreeze.

Observe the recent avalanche activity. This shows you which slopes might release, how big the releases will be and volume of snow that might go.

Keep checking our Facebook updates: www.facebook.com/HenrysAvalancheTalk where we’ll keep you informed of any changing conditions or instability in the snowpack.