Off Piste Snow Depths for the Haute Tarentaise. Meteo France

Happy new year everyone! Off piste snow depths in the N French Alps remain very good for the time of season. We can often ski right down to 1000 m, and there’s some lovely deep powder to be found. In many higher exposed areas, particularly above 2200/2400 m, the surface snow has been wind-affected, hardened and densified. Hence much less easy to ski.

New areas of windslab are forming, especially on high NW through to NE facing slopes. If skiing in these areas, we need to be very wary of these.

Colder N facing slopes at high altitude have not benefited from this stabilising effect, however. Much of the snow on N facing slopes above 2200/2400 m remains unconsolidated, and will in some places become a dangerous layer when a significant amount of fresh snow falls on top of it. 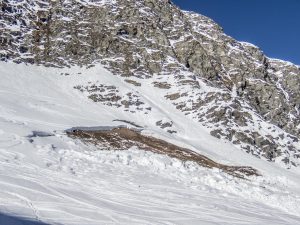 When out ski touring we’ve been noticing some ‘glide cracks’ appearing. These are cracks in the snow that extend right down to ground level, revealing the brown earth beneath. We’ve particularly spotted them on steep sunny slopes, with smooth grass under the snow.

They certainly look ominous. But for the off-piste ski skier, they’re not much to worry about unless you spend a long time hanging around below them. In fact, glide cracks are a sign of snow stability. (Unlike slab avalanches, they have no significant weak layer, and cannot be triggered by the weight of skiers passing by)!

Glide cracks rarely release, but they are very unpredictable in behaviour and nature. If they do release, they can cause a lot of destruction to infrastructures. Added to this, they cannot be controlled by preventative avalanche blasting. Hence, when they appear above a ski run, they present a total nightmare for ski resorts. The resort will often end up having to close the run to skiers, especially later in the day as things warm up. We often see this happening in the warm Spring months, when glide cracks are most common. 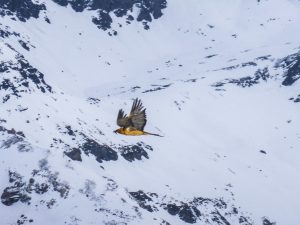 Friday 29th:  After a bright morning, clouds will thicken in the afternoon, turning into ‘white out’ conditions for skiers. Anywhere between 15 to 40 cm of snow expected at altitudes of 1000 m and higher.

Saturday 30th: Snow will continue falling thickly throughout the day. This may well turn to rain at altitudes below 2000 m, as the day warms up. 30 to 50 cm of snow could fall above 2000 m, bringing with it a higher avalanche risk. 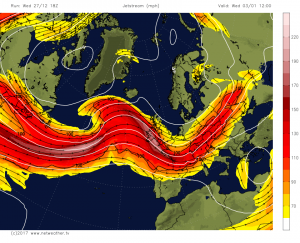 Unlike recent seasons when the Jetstream stayed either North or South of the Alps, the Jet Stream seems to be running across Central Europe. This means that we can expect a sustained spell of unsettled weather.  The first half of January looks like Mid December with a series of storms and frequent snowfall. This will be interspersed with occasional sunshine. So this looks good for powder days in January. As far as we can see, this continues until at least 12th January and maybe for longer. We will keep you updated.

The best way to stay safe off-piste over the next few days is to:

Once the danger rating goes to 3 and above, adjust your skiing accordingly. In particular stick to areas where slopes are 30° or less, unless you really know what you’re doing, and remember about the increased danger on those high N facing slopes, where the snowpack is still unconsolidated in many places.

See what the avalanche danger ratings mean on henrysavalanchetalk.com/hat-advice/danger-rating.

Check the danger ratings on the Meteo France avalanche risk bulletins for your area.