A cold and snowy start to the new season! 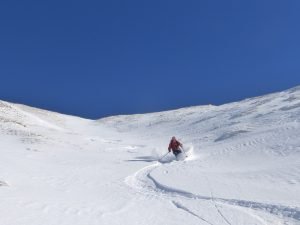 Some nice strips of powder here and there. Wayne Watson photo

A chilly start to the 2017/18 season, and more snow than this time last year!

Val d’Isere, Tignes and some other resorts opened last weekend, luckily, we’d received enough snow for quite a few ski runs to be prepared. Since then, we’ve also had a couple of small top ups of fresh snow (3 to 10 cm), with more forecast over the next few days for much of the N. French Alps.

Following a busy opening weekend, the pistes are now virtually empty. Off-piste conditions are currently a bit…very thin, and we could do with more coverage. When visibility is poor, it’s probably best avoided at the moment. There are a lot of rocks lurking beneath the surface, and there’s not a lot of base. We’ve seen a few injuries to skiers, and to their skis! That said, there are a also quite a few nice strips of powder and creamy compressed snow to be found in the off-piste (see Wayne Watson’s photo), which are especially nice when you can see where you’re going!

Because the pistes are so quiet they’ve been making for some lovely skiing when we’ve received fresh powder snow on top of the groomed snow. In white-out conditions it’s been very pleasant to stick to the powder on the piste, without risking the rocky off-piste! Thanks to recent low temperatures, snow cannons have been working flat out for the last few days and you can ski right down to resort level in most high resorts. This opens lots of possibilities, the link with Val d’Isère and Tignes is open for example. Some of the pistes are pretty narrow, so you need to keep your wits about you and control your speed, but the snow quality is good for this time of season!

It looks as if there are going to be a few cloudy days ahead, with potentially a lot of snow. The avalanche risk is currently only about a one, but we need to beware of any substantial amount of fresh snow, say half a metre or more. If that happens, the avalanche risk will shoot up to around a 3 or even a 4! Check out what all the avalanche danger ratings mean on henrysavalanchetalk.com/hat-advice/danger-rating. Meteo France have not yet started issuing their official avalanche bulletins, but these should be coming out in the next couple of weeks. 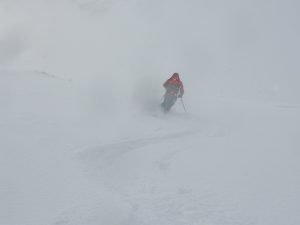 Thursday 30 Nov: Flat light conditions in the mountains with low cloud and light snowfall. Up to 10 cm snow expected. N wind, with gusts up to 60 km/hr. Temperatures well below normal for the time of season: down to -10° C at 1800 m.

Friday 1 Dec: Extremely cold again in mountain areas. Thick cloud, causing white-out conditions for skiers. Snowfall will die out as the day goes on, but will  resume during the night, mainly in areas along the Italian border. Here, between 5 to 20 cm of snow expected down to 1000 m. Wind turning NE, and gusting up to 50 km/hr in exposed areas.

Saturday 2 Dec: Another cloudy day. Some lucky areas, such as the Haute Maurienne, may see some snowfall in the morning. E.g. Bonneval, Val Cenis, possibly Val d’Isere could receive 5 to 20 cm of fresh. Remaining bitterly cold: down to -13° C at 2000 m. E to NE wind, with gusts of 50 to 60 km hr.

Sunday 3 & Monday 4 Dec: Still extremely cold. Sunday: mostly bright, but starting to snow again down to low altitudes as evening draws in. Monday: A few residual snowflakes floating around in the morning, clearing up  as the day goes on. N wind (40 to 50 km/hr).

Next significant snowfall will be …

… possibly Saturday 9th September. But it is too early to be sure.  There will also be intermittent light snow until Monday 4th December

We are expecting the weather to stay very cold throughout next week. Cold weather and a thin snowpack is a recipe for a weak unconsolidated ‘sugary’ layer of faceted grains or ‘grains anguleux’ forming. So we will be studying the avalanche bulletins for any reports and our off-piste guide friends will give us anecdotal reports. Keep observing the quality of the snowpack and look out for a loose ‘sugary’ layer of snow forming, made up of grains of snow also referred to as ‘goblets’ and ‘depth hoar’ frost. This will be safe to ski in now but can/will be a source of weakness and instability if we got 50cm snow all of a sudden eg on 9th December – perhaps even more unstable at this time of year since any unstable layers of snow in the accessible off-piste will not been compacted by skiers. ‘Skier compaction’ plays a big role in stabilizing the snowpack on much of the classic accessible off-piste once a few thousand tracks have been laid down. The fact that there is not much compaction at this time of year is one of the reasons why so many accidents happen in December (remember that most avalanche accidents happen December, January and February).

The reference source for info on this is the avalanche bulletin – pay particular attention to recent avalanches triggered by people. You will hear about them from people in the resort you are in as much as you can read about them in the bulletin. Recent avalanches, especially recent accidental avalanches, are a big warning that the off-piste is getting dangerous and you need to stay in and around slopes that are no steeper than 30°!

If we receive a significant amount of snow (half a metre or more) the avalanche risk will go up to a high 3 or 4. Keep on your guard!

In poor visibility, stick to the piste until the off-piste snowpack improves!

Here’s to a great season ahead! Ride Hard, Ride Safe!