Wild, windy, unsettled weather with more snow for the week ahead! 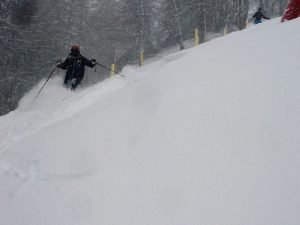 Weather and snow conditions in the N French Alps have been, and will continue to be, extreme over the next few days. High winds are expected, along with a lot more snow or rain and temperatures above normal for the time of season.

The avalanche danger this week will be directly related to a) the overall total accumulations of snow b) the even more large amounts of snow added by the wind in many places and c) the rise and fall of the rain/snow limit altitude. Any wet snow/slush avalanches occurring will be directly connected to rising and falling temperatures, dependent on at what altitude the rain/snow limit is (and thus what altitude you are!).

Plenty of windslab and snow accumulations are forming, particularly on leeward facing slopes away from the prevailing W’ish winds above 2500 m. Heavy snowfall expected on Wednesday evening, accompanied by extremely strong winds, will lead to a very unstable situation on Thursday 4th January with an avalanche danger rating of a 5 above 2500 in most of the Northern French Alps (at least Savoie and Haute Savoie). See what the avalanche danger ratings mean on henrysavalanchetalk.com/hat-advice/danger-rating.

The weak layers of cohesionless ‘sugar snow’ on cold, high N facing slopes shaded from the sun are still there, way beneath any fresh snow/windslab that are forming on top of them – this weak layer has very little impact now in the overall stability (or lack thereof) of the snowpack. The avalanche danger now is related to the snowfall intensity and significant accumulations as well as the temperature increases related to the recent snowfalls (often referred to as ‘direct action avalanches’). At the time of this writing, 08:15 on Thursday 4 Jan, we’ve had close to a metre of snowfall over the last 24 hours at 2500 metres and are expecting another metre or more over the next 24hrs in most of the N. French Alps. Major access roads to ski areas have closed due to the anticipated avalanche danger e.g. the road from Bourg Saint Maurice to Tignes and Val d’Isère in Savoie.

We will be getting lots of naturally occurring wet snow avalanches each time the rain/snow limit rises. We saw many of these occurring on Wednesday (yesterday), some down to road level. And we will see a lot more of this over the next few days into the weekend. One such wet snow avalanche, with debris up to 6 m deep, came across the road between Val d’Isère and Le Fornet. Fortunately, nobody was on the road at the time, but a probe search had to be undertaken by the piste patrol service, just in case.

The net effect of all this rain and higher than normal temperatures will be a very good bonding and stabilising of the snowpack in these altitudes where the snow is/has been ‘humidified’  once the temperatures go down to seasonal norms but that is not the case at the time of this writing! ..stabilizing in these areas/altitudes below 2500 m, will start to take place starting on Saturday/Sunday.

Not only will the avalanche danger rating be ‘Extreme 5’ to ‘High 4’ over the next few days, but off-piste snow conditions will also be lethal. With temperatures above seasonal norms, accompanied by rain below altitudes of 2200/1800 m, the snowpack at these lower altitudes has become very heavy, deeply humid and difficult to ski. If it refreezes overnight, there is a nasty crust to contend with first thing in the morning. At altitudes between around 2000 to 2500 m, mainly just the superficial layers of the snowpack have been humidified and heavy. Any fresh snow expected at higher altitudes will be extremely wind-affected.

Added to this, visibility could be very difficult, with cloudy days ahead, and likely ‘white out’ conditions. Earlier in Val d’Isere this week a group of ski tourers became disoriented in flat-light on a steep and exposed off-piste area. They called the piste-patrol rescue services, and ended up having to be helicopter-rescued from above a cliff face. It was too dangerous to ski out, and everyone’s lives (including the pisteurs who came to rescue them) were put at risk.

Thursday 4th: A wild and windy night (with ‘tempestuous’ gusts of NW to W wind) along with more snowfall (40 to 60 cm of snowfall in some areas). Heavy precipitation all day, with a rain/snow limit somewhere between 1900 & 2500 m. So it will be very wet at resort level. Above 2500 m we could see 30 to 60 cm of snow falling, for example, in the Maurienne & Haute Maurienne area (Bonneval, Val Cenis), and up to a meter or more in other more Northerly areas of Savoie and Haute Savoie! Of course, all this fresh snow will be extremely wind affected. Strong NW to WNW winds at high altitude, particularly near the border with Italy. Highest daytime temperatures: 5° C at 2000 m, -2° C at 3000 m.

Friday 5th:  Light snowfall (less than 5 cm) above 1900 m or so during the morning. Brightening up as the day goes on. Very strong WNW to SW wind above 3000 m during the day. Overnight the wind will strengthen even more, and will turn more Southerly. 0° C at 2200 m first thing in the morning, rising to 2600 m later.

Saturday 6th: Very light snow near the French/Italian border, e.g. Bonneval (possibly above Le Fornet in Val d’Isère) above 1200/1400 m. As night comes in, the snowfall will become more intense, particularly in the E of the Savoie region. Here we could see another 60 cm of snow above 1800 m overnight. Strong SW to S wind at high altitude during the day, becoming even stronger and more SE overnight. Foehn and Lombard wind near the French/Italian border.

Tuesday 9th & Wednesday 10th: Light S winds, turning more W. Tuesday: Brighter, but still some light snow/rainfall in the S and SE of Savoie. Wednesday: Some sunshine and a little colder with 0° C around 1400 m. Maybe some more light snowfall.

Weather Outlook for next 2 weeks

I expect many of you may be thinking the snow will stop falling soon and settled weather will resume. As far as we can see this will not happen. The weather looks set to remain disturbed for the foreseeable future.

Yes there will be a few days in the next 10 days that are calmer and the sun will poke through, but the general indication is for intermittent snowfall right through to 17th January. (at least).

The current Atlantic weather systems will continue until Saturday. Then the low-pressure systems switch to the Mediterranean creating a different kind of unsettled weather. The kind where snow comes over the Italian border. This will be followed by low pressure over Eastern Europe bringing colder weather and storms from both the North East and North West. So all quite messy and hard to be precise. But expect a more settled day on Saturday 6th and Tuesday 9th Wednesday 10th and then again on Saturday 13th Sunday 14th. The exact timing of these breaks in the weather is not certain, but for the next 2 weeks it currently looks like 9 unsettled days and 5 more settled days with three breaks in the bad weather.

What I mean by unsettled is a tendency to wind and clouds with regular snowfall interspersed with sunny breaks in the weather. Next week is much less stormy than this week but Wk C 14th January could through some more stormy weather at us again.

Follow the advice of local authorities i.e. road closures, security around AND in buildings so you don’t end up with a load of snow on your bed or worse! 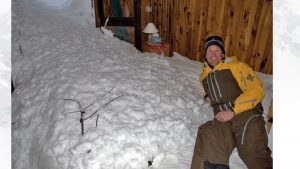