Much milder for the next few days. Maybe more snow showers from Sunday. 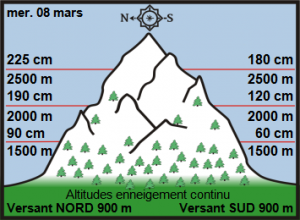 This week it’s just kept on and on snowing. There is now a thick layer of recent snow (100 cm +) all over the mountain, lying on top of the older snow. This has been of fantastic quality in the last few days. We’ve been taking it super-cautiously, sticking to low slope angles (below 30°) and not venturing far from the piste. But this has been by far the best and deepest light powder snow of the season!

With milder temperatures ahead, this thick depth of fresh snow will start to become very humidified, particularly on warmer slopes below 2500 m.

In high areas near mountain ridges the snow has been ravaged by ferocious winds (upwards of 100 km/hr gusts at times) and is often very hardened.

The thick layer of recent snow will continue causing snowpack instability for the next few days. With mild temperatures we expect to see quite a few natural avalanches occurring, especially on the warmer slopes below 2500 m. Some of these could be very large in terms of volume and in the distance they travel. So much snow has fallen in such a short space of time, often with extremely poor visibility. Piste patrollers doing avalanche control have had a massive job to secure the ski area, roads and buildings. When visibility has been good enough, they’ve even been throwing explosives from helicopters to do this. The Data Avalanche website shows some of the results. This dramatic drone footage from Radio Val d’Isere is another good example of the sort of slides that have been purposely triggered:

For off-piste skiers, there is a considerable risk of triggering a slab avalanche. We need to be particularly wary of steep W to NE facing slopes above 2000 m, while all slope directions demand caution at the moment. That persistent weak layer in the snowpack remains beneath all the fresh snow in many places especially on the North’ish sides of the mountain. NW wind over the next few days will be causing new windslab to form, especially near mountain ridges. The avalanche danger rating has been at a high 4, and will continue to be considerable over the next few days. 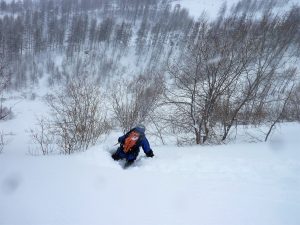 Having fun in the deep snow. Wayne Watson photo

Friday 10: Wall to wall sunshine with just a few isolated high clouds. NW wind dying down throughout the day. Temperatures climbing again to a very mild  7 to 10°C at 2000 m.

Tuesday 14 & Wednesday 15: Cloudy, with possible snow showers on Tuesday. Sunnier on Wednesday. Temperatures normal for the time of season.

Check out the daily avalanche bulletins from Meteo-France before you go off-piste. Released around 4 pm the evening before, they contain huge amounts of information AND see the Henry’s Avalanche Talk Facebook page – we have lots of great info and updates on events that can help you to have more fun off-piste – plus a lot of it is very entertaining! See: facebook.com/HenrysAvalancheTalk