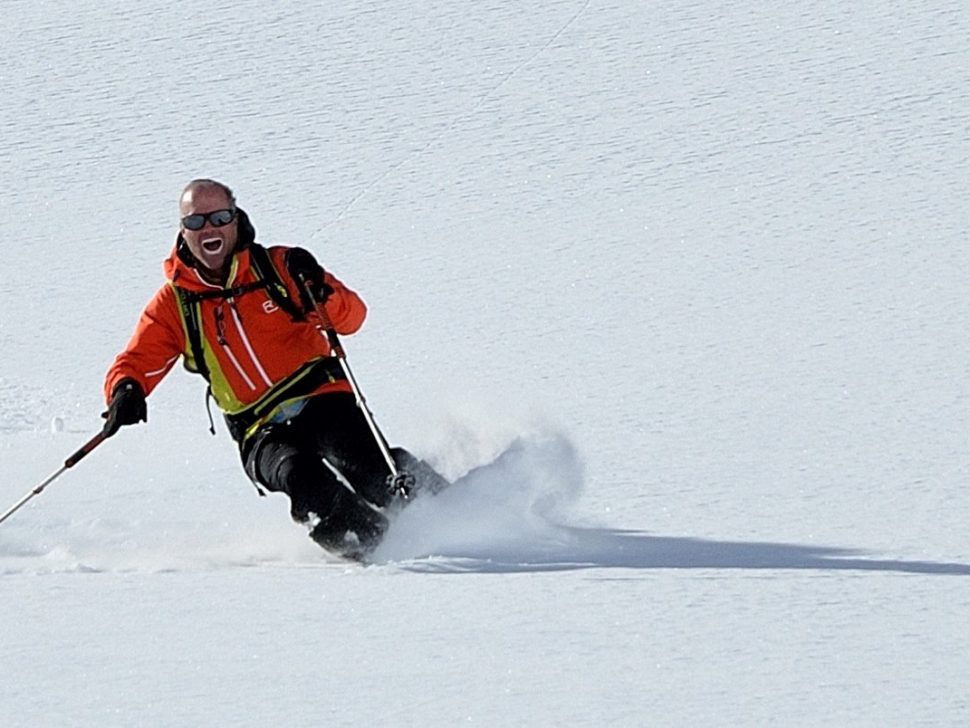 As skiers, more and more of us are wearing helmets nowadays, particularly for use on the piste. But how about when we venture off-piste?

After discussion with Henry, here’s where he and the HAT team stand on the subject….

There are certain situations when we would definitely wear a ski helmet, such as when we’re spending the day on the piste (groomed, patrolled runs). In recent years we’ve all noticed people skiing faster and faster, often bordering on their limits of control. It makes good sense to be wary of reckless people crashing into us. If we’re planning a day of lift-accessed off-piste, we’ll estimate the amount of time we’ll be spending on and off piste: if we’re likely to be on piste quite a bit, we’ll wear a helmet that day too. Dangers on the piste come from something that we can’t influence (reckless skiers), and our degree of skill is irrelevant. In mountaineering terms these are called objective dangers¹, and helmet-wearing on piste makes utmost sense to us.

But how about when we go into off-piste territory? That is the subject of this discussion, where we’ll be looking at helmet-wearing by adult recreational skiers and snowboarders who spend a large proportion of their time in classic off-piste and ski touring terrain – as opposed to ski mountaineering terrain, which implies exposure to the objective dangers of mountaineering.

The crucial difference between skiing on and off piste in this context is that when you go off-piste, exposure to danger is much more self-inflicted. Here, any other potential danger is much more within your own control than it is on the piste, and you also stand much less chance of being collided into by another skier. In off-piste terrain, accidents nearly always happen due to a human factor: 9 in 10 avalanche victims trigger their own avalanche (or someone in their group does); people find themselves ‘stuck’ on top of a rocky cliff due to their own mistakes in decision-making and route-finding, or because they went along with someone else’s wrong decision.

When you’re skiing off-piste, the top priority is to try and prevent an accident in the first place by good decision making, rather than relying on protective equipment, like a helmet. Preventative action involves getting educated in avalanche awareness skills, practising these skills, and making good decisions about:

We’re not saying that you shouldn’t wear a helmet. We’re saying that, for the recreational off-piste skier, it is far more important to focus on prevention than on protection.

Unless you’re in an area where rocks or ice could fall on your head from above, we do not feel that, for the normal recreational off-piste skier, there’s a convincing argument for using a helmet to ‘skin up’ (walk up the mountain using ski skins) for an hour or so to then ski back down. (Most people we see end up strapping the helmet to their backpack rather than wearing it on their heads anyway). If you’re on a longer tour, restricted in the amount of kit you can carry, you would certainly not want to prioritise helmet-carrying over essential items, such as ski crampons.

In fact, in terms of the most important safety factor, prevention, you need to ask yourself whether your helmet  is overshadowing your attention to prevention:

Consider the following findings from a survey by the Wilderness Medical Society on risk-taking behaviour in skiing, when 710 helmet and non-helmet wearers were questioned:

In The Avalanche Review (April 2016), published by the American Avalanche Association, two experts, Dr Martin I Radwin² and Dr George Vargyas³ discuss whether helmet-use in off-piste terrain will improve our chances of survival from severe traumatic brain injury. Both are from medical backgrounds and passionate about snow and avalanche science, and have different views on this. Ultimately, however, they agree that there is insufficient and too much conflicting data to definitely prove whether or not a helmet will protect you against severe brain trauma in off-piste terrain.

They refer to evidence based medical gradings (EBM) drawn up by an expert panel convened by The Wilderness Medical Society as guidelines for prevention, rescue and resuscitation in avalanche accidents. The panel allocated EBM gradings to helmet wearing in off-piste terrain. The fact that these gradings were downgraded from an initial 1B (strong recommendation, moderate quality evidence) to 1C (strong recommendation; low quality evidence) is testimony to this lack of clinical evidence. (The full classification scheme for grading evidence and recommendations in clinical guidelines can be seen in table one of the attached file.)

Vargyas says that the recommendation for helmet wearing should be further downgraded to no higher than 2C (weak recommendation, low quality or very low quality evidence). He argues that the initial high grade 1B recommendation was “intuitive but wrong, founded on opinion rather than on robust evidence”. Radwin argues that, “since there is no risk to wearing a helmet, a strong recommendation should prevail, as any mitigation of head injury may save lives, even from asphyxiation”. He also feels that any argument about emboldening skiers to greater risk-taking by wearing a helmet is weak – an opinion that contradicts the research/survey by the Wilderness Medical Society cited above in this article.

At HAT, we fully respect your personal choice over whether or not to wear a ski helmet and ask that you respect whatever others decide too. There are certain situations, as cited above, where we would definitely recommend you do so, other situations where the case is not so clearly-defined, and still others where we go so far as to advise you not to wear a helmet. What is clear to us, however, is that PREVENTION is the number one priority when you are skiing off-piste. Equipping ourselves with a confidence-bolstering helmet and other safety protection gear is no substitute for good decision making, risk management, and being prepared to carry out a rescue, if the worst should happen. In Henry’s words: “It is more important to use your head off-piste than to protect it”.

In summary, as long as you feel that wearing a helmet (airbag, back protector, etc) does not distract you from the priority of prevention, go ahead and wear one…. but remember that a helmet didn’t help Michael Schumacher (all unconfirmed rumours of Go-Pro mount screws aside). Nor, sadly, did it help the young man who died in Tignes after falling over a small cliff band in early March 2016 (and many others who have been seriously injured or killed off-piste, despite wearing a helmet and other protection).

¹Objective dangers or hazards are generally used in reference to mountaineering and defined as: a danger, such as a rock or ice fall, to which the individual and his/her skill is irrelevant. When skiing on-piste, the threat of an out-of-control skier is referred to as an objective danger in this article because no matter how skilled the victim is, he/she has no influence over the threat that the danger poses.

²Dr Martin I Radwin is certified in both Internal Medicine and Gastroenterology, a Medical Researcher and International Lecturer. He has been a professional member of the American Avalanche Association for over 20 years.