I am spending the day at Listex (London International Snowsports Exchange).  This is a gathering of ski trade and service providers to meet, discuss and form new trade relationships.  The first session is titled Back to the Future and is a discussion on skier trends and the snowsports industry and what skiers and boarders want to do. 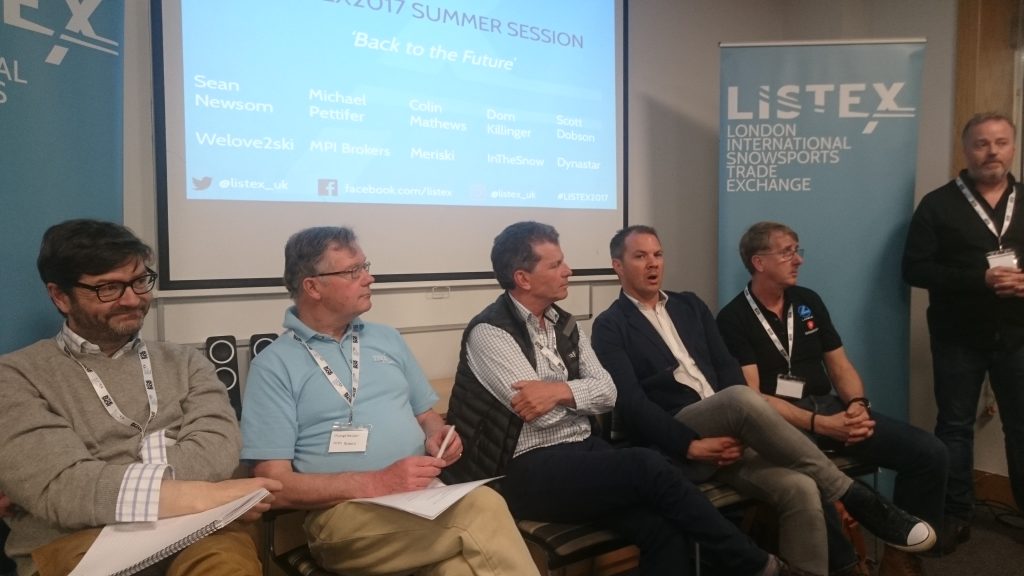 Sean Newsom from We Love to Ski talked about the incredible investment that has taken place in the alps in renewing lifts and resort services and buildings. He cited how European resorts may be learning from Vail who have invested consistently.

Michael Pettifer from MPI talked about how the French authorities have stopped ski hosting services offered by Tour Operators and the Ski Club.  As well as making French ski holidays less attractive, this has increased risks taken by skiers on holiday as skiers have less guidance and help.

Colin Matthews of Meriski noticed that more people are coming for an all round mountain experience, not just skiing on the piste and ski lessons.  More interest in off piste and touring, elaborate swimming pool complexes (e.g. Aquamotion in Courchevel), walking and snowshoeing.

Dom Killinger from In the Snow talked about skier trends and the growth in the technology used whilst skiing.  Go pro, Ski tracks app, FATMAP are changing the way people enjoy skiing.  These devices have increased interest and may help to attract more people to skiing

Scott Dobson from Dynastar highlighted the impact of the change in the weather and snow shortages at the start of the season.  This has been partly mitigated by increased investment in Snowmaking.  But it affects the kind of skiing people can do restricting people to stay on the pistes.  Scott asked how can we make skiing on piste sexy again.

Barriers to Entry for skiers going on ski trips

Colin talked about price and the cost of accommodation is still quite high.

Michael has talked to non-skiers about their perceptions of skiing and noticed that people say “they don’t like the cold” and “fear of injury” are perceptions that put people off.

Sean talked about the way general news media present avalanche accidents makes the risks seem much higher and puts people off. The press also exaggerates the problems of snow shortages.  The press also present skiing as the activity of toffs and the very wealthy creating a perception it is more expensive than it is.

Michael said that presentation and photographs can be off-putting, photos tend to show extreme skiers, challenging slopes and cliffs, amazing ski tricks backflips and jumps.  The photos don’t look like things I can do. This says it is not for me.

Scott talked about developments in ski boots that are easier to walk or tour in and then ski bindings need to respond.  This is helping skiers but may be making equipment choices more complex and confusing for the customer.  This lines up with the complex idea of which ski should I have? Do I need 2 or 3 pairs of skis?

Dom talked about rental shops issuing inappropriate skis to holidaymakers. This will lead to a less than ideal experience.

Sean talked about how skiing is an ageing activity and not attracting as many new younger skiers as it used to.  He asked, is skiing as cool as it used to be? However many more people 50+ and 60+ are continuing to ski for later in life.

Dom described how the modern ski delivers “power steering” making it much easier to ski.

Has skiing become more or less expensive over the last 5 years?

Colin (MeriSki) thinks it has not. But what has happened is there are now more access points and different price points to get into skiing through racing at home, uni and school trips as well as upmarket chalets and accommodation.

Scott (Dynastar) said skis have not become more expensive and the products are being engineered to the same price points as they were 5 years ago. Lift passes have gone up a little to help cover new investment but the increases are modest. Sean Newsom thinks lift pass prices have moved ahead of inflation and are now likely to go past €300 a week.

Sean Newsom thinks lift pass prices have moved ahead of inflation and are now likely to go past €300 a week. He has noticed people talking about racking back for next season, maybe driving down and staying in an apartment.

Sean thinks the remorseless drive upmarket with ever more luxurious chalets is stopping.  The Russians are not coming so much.

Dom talked about how the Channel 4 programme “The Jump” has attracted a lot of interest as evidenced by the social media activity around their posts on it.