How to have an amazing day off-piste 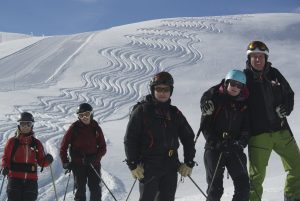 You know that some days things seem to work out well and other days nothing goes right.  Understanding why this happens and whether we can do something about it will help us to have an amazing day off-piste, it will also help us avoid an accident

For most us, the kind of skiing day we will have is often pre-determined as we step out the door and go the slopes.   It will have been set by things that happen before we stepped out.   And yet, few people seem to be aware of this.  It is in our nature to believe we can influence events by the decisions we take and that what happens can be directed on the day.  But there is evidence and theory to suggest we may not be in as much control of events as we think. We are subject to decisions we took before we started.  Things that happened before we set off will influence whether we have an accident.  They will also influence whether we have fun day, an amazing day off-piste or a bit of an ordinary day.

The first is looking at vulnerable teams and events.

This comes from studying of reports into serious accidents enquiries whether for avalanche incidents or yachting accidents.  It is a recognised phenomena that accidents often occur as a result of a series of small things going wrong that lead the group into a disastrous or fatal accident.  I know from my own experience of a fatal man overboard on a yacht that the outing had been characterised by difficulties from the start.  We were short of crew, the boat was trapped on the pontoon, we were late to the start, sails did not go up and come down in a smooth manner.  This all contributed to a situation where a sail was in the water and needed to be recovered in big seas at night.

At HAT we have talked to people who suffered in avalanche accidents and we often hear the quote, that members of the group sensed something was not right, some of the group were uncomfortable proceeding, there is not enough allowance being made for the weaker skiers in the group.  There a series of symptoms of things not being quite right and this culminates in one unlucky decision and bang, the slope releases and someone is trapped or injured.  This video tells such a story

The second is making your group safe and secure.

The importance of planning, fitness and mountain training is massive in contributing to a successful day out.  If you have read the bulletins, studied the weather, done some navigation preparation, have the right kit, are strong enough and everyone knows how to keep things safe.  This kind of group will get on well and will find better snow and will run into fewer risks.  If something does go wrong it is likely to be manageable and recoverable.

Third is looking at groups who have an amazing day off piste.

This comes from the composition of your ski group.  If everyone recognises the importance of leadership, communicating frequently and well and has a shared tolerance for risk and a shared ambition for the outing, then things are going to work out much better.  This kind of group will not only stay safe but will have much more fun.  This video shows the result

Amazing day off piste with Henry from Henry’s Avalanche Talk on Vimeo.

Antifragile vs Robust vs Fragile

This post was inspired by a book I have been reading called AntiFragile by Nassim Nicholas Taleb.  In this book, Taleb introduces the idea of antifragility rather than robustness as the opposite of fragility.  We would naturally think that opposite of fragile is robust.  But Taleb argues that robust is just the midpoint between fragile and antifragile.

When we put fragile on a package, we mean be careful the things inside might break.  If the items inside are robust then they will not break.  But in this case the best that can happen is the item will not get worse it will not break.  Something that is anti fragile will improve as a result of being challenged or experience unexpected adversity.  This idea would apply to skiing groups as follows

Fragile (or vulnerable to danger),

This group lacks experience, has done no planning, does not communicate, has different skill levels and has different ambitions for the day.  At best this group will have a fraught day, at worst could end up with an accident.

This group has good training and equipment has a plan and a grasp of conditions.  The group is cautious, respects the weakest member and is supportive

Antifragile (safe and has an amazing day);

This group is like the robust group but has excellent communication between members, has a shared ambition, understands the heuristic traps that lead to poor decision making.  They do not need to follow tracks and know that tracks mean nothing; they do not worry they are missing out when other groups go onto slopes they consider dangerous; they have an exceptional understanding of the terrain and the snow conditions.  The group thrives on pushng themselves to their own limits, so they end the day on a bit of high.  They get stronger as a group following every trip.  They are antifragile not just robust.

So where I started out here was that whether you have an amazing day off-piste heavily depends on your group dynamic and experience and planning.  Is your group fragile, robust or antifragile?

This is a critical part of the HAT message.  We say stay, safe have fun.  We want you to get to safe, but then go beyond safe to fun.  You should have an amazing day off-piste as often as possible.

PS  you can get one of the bits of preparation done, we have a special offer on transceiver training until 30th November click here