Sunny days and settled weather ahead.

After the shock of the Tignes avalanche accident, the off-piste snow stability will improve.  But there are still places where we need to be careful. There is a weakness in the snowpack that has been present since the start of the season.  See ANENA warning.  The weather will encourage you to go out and explore.  Read the bulletins to find out where the risks exist each day 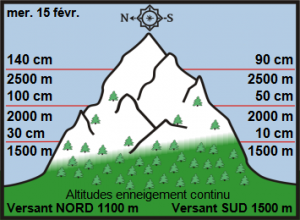 Off Piste Snow Depths by Meteo France for the Haute Tarentaise

Off-piste snow report for 16 to 22 February

With current off-piste snow depths, we can ski down to around 1100 m on N facing slopes, and down to 1500 m on S facing ones.

Even when the forecast makes us feel we’d rather stay in bed, it’s always worth getting out there off-piste. The visibility has been much better than expected, and should be pretty good for the week to come. By ski touring, using skins, we’re continuing to find some lovely areas of powder snow on some N facing slopes. On S facing slopes, the snow is hard and crusted first thing in the morning, slowly softening up as the day goes on.

With milder temperatures ahead the snowpack will continue to settle down, particularly on sunnier S facing slopes. It will still be less stable on high-altitude N facing slopes shaded from the sun. Snowpack tests show a persisting weak layer buried under a thick layer of recently fallen snow and/or hardened windslab snow.

If good overnight refreezes continue, the snowpack will continue being more stable in the morning. The avalanche risk will rise as the day warms up with the snow humidifying and becoming heavier. E facing slopes, which catch the first rays of sun, will be the first to become less stable, followed by S-facing and then W facing ones. We could see a few naturally-releasing wet snow avalanches later in the day on warmer slopes. These will probably be quite small, though, as there is no fresh snow on the cards and only negligeable wind.

If we’re skiing on steep slopes at high altitude, we need to beware of triggering windslab avalanches. High W to NW facing slopes and areas near the French/Italian border affected by the Foehn wind are particularly to look out for.

When there is a persistent weak layer in the snowpack, as there is this season, it is extremely difficult to predict when and with what frequency an avalanche/s will occur. It’s well-known that an off-piste slope can be skied many many times with nothing happening. Then a skier comes along and triggers an avalanche. There had been some, but not much, avalanche activity in the days before the Tignes avalanche. The avalanche risk had been 3 for several days. This particular slope had already been skied several, perhaps many, times (including by the victims themselves). 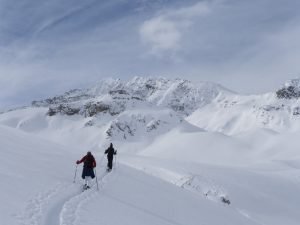 Detailed snow and weather forecast for 16 to 22 February

Sunday 19: Cloudy morning with some bright spells. Slightly warmer than normal for the time of season.

Tuesday 21 & Wednesday 22: Sunny and dry with temperatures slightly on the rise.

If you intend to ski a steep pitch, ask yourself: “If this slope should avalanche, what will happen to us?”

Watch out for terrain traps (troughs, cliffs, holes, trees, lake….).  Holes and gullies or anywhere the snow could pile up; cliffs that you could fall off; lakes that you could end up in.  These hazards mean that the consequences of an avalanche will be much more severe.