Variable off piste conditions for the week ahead, with fresh snow for some! 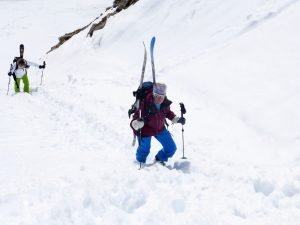 Following a week of spring off piste snow conditions, it looks as if we’re due for a mixed bag of weather in the week ahead, with possible significant amounts of snowfall in areas near the French/Italian border, such as Val d’Isere, Bonneval and Val Cenis.

In the last week or so, the snowpack has been melting and shrinking down remarkably quickly in the very warm daytime temperatures, and minimal overnight refreeze. We’ve seen quite a few natural slides of humidified heavy snow as the snowpack loses its stability, particularly later in the day as temperatures rise. There has been a real danger of skiers setting off an avalanche of  heavy snow, on sufficiently steep slopes (30° or more) that have not already purged. There is an excellent video from Alain Duclos at Data Avalanche that reminds us about the dangerously weak layer that still exists and is ‘re-activated’ once it gets saturated with free (melt) water due to sustained high temperatures – this has been the root cause of most of the big avalanches in the Northern French Alps this past week especially on North’ish facing slopes (an old weak layer made even more fragile because of melting deep into the snowpack due to the sustained high temps) .

In the next few days ahead, temperatures will fall to something resembling seasonal norms. Some lucky areas, especially those near the French/Italian border, could be due for quite a bit of fresh snow. This will give us a nice cushion to ski on again on top of the spring snow, which can be very hard and crunchy first thing in the morning! It should also fill some of the ruts caused by people skiing the spring snow far too late in the day… there’s a chance of a lot of snowfall in some areas along the French/Italian border!

The expected S wind, Foehn and Lombard will cause more windslab to form, especially on N’ish facing slopes above 2500 m, and near the breezy French/Italian border. We particularly need to look out for these slopes when we’re out skiing, as just one or more skiers could trigger a slab avalanche. That weak layer still persists on these N’ish facing slopes.

The avalanche risk is currently about a 2, rising to 3 as the day warms up with the risk of slides of heavy humidified snow. If we receive the snow that is forecast, the avalanche danger rating will rise again even if the temperatures drop – the rise in danger rating will be due to accumulations of snow (which will increase avalanche activity as a direct result of the snowfalls on all slopes) combined with the weakness in the snowpack many places (serious weakness will persist mostly on N’ish facing slopes over the period that we are talking about here). Check out the daily avalanche bulletins from Meteo-France before you go off-piste.

Thursday 23: A mixture of sunshine and cloudy spells. A few localised showers in the afternoon, falling as very light snow above 1800 m. Greater quantities of snow, particularly overnight, expected in the Haute Maurienne valley in Savoie (e.g. Bonneval, Val Cenis, around the Pissaillas glacier above Le Fornet, Val d’Isere). Here we may get anything up to 40 cm of snow at altitudes above 1800 m in the space of 24 hours. Strong S wind with gusts of Foehn and Lombard in exposed areas. -2° C at 2000 m and -7° C at 3000 m.

Friday 24: Some isolated snow showers (possibly up to 15 cm) throughout the day (snow/rain limit 1800 m). This will be much heavier in SE Savoie (e.g. Valloire/Valmeinier in the Maurienne) where up to another 40 cm of snow may fall in 24 hours. Very high S to SE wind at altitude with Foehn/Lombard gusts up to 100 km/hr.

Saturday 25: Cloudy with constant snowfall near the French/Italian border, snow showers elsewhere (rain/snow limit: 1800 to 2000 m). SE to E wind with gusts between 70 to 100 km/hr in the morning. This will turn NE later and calm down as night comes on.

Sunday 26: Cloudy, with snow showers above 1300 m. Very light wind and temperatures lower than recently (down to normal for the time of season).

Monday 27: Some sunshine with cloudy spells, possibly bringing a few showers. Again, high mountain areas near the French/Italian border will be particularly cloudy and may get some more snow. Temperatures average for the time of season.

Get out there whatever the weather looks like first thing in the morning. Off-piste is always a great adventure, and you never know what you may find even when it looks grotty and grey from your window! There are bound to be some clear spells that you won’t want to miss! From our experience, there’s always lots of room on safe slopes when a sudden clearing appears… and if no clear spell happens… well, you can always go back down or ski in safe areas of the trees.

See the Henry’s Avalanche Talk Facebook page – we have lots of great info and updates on events that can help you to have more fun off-piste! See: facebook.com/HenrysAvalancheTalk and our on-line talks give insight on how to be safe.