Watch out for the dangerous weak layer!

Henry warned us on Monday that Tuesday 11th December would be risky with a persistent weak layer under the new snowpack from above 2400m. So it proved. We have seen considerable evidence of recent avalanche activity in the past two days. This has been most apparent on NE facing slopes above 2400m. All the signs are there that there is a considerable risk (Rating 3), especially on these slopes. Keep an eye out for recent avalanche activity, you can learn alot from looking at the evidence. 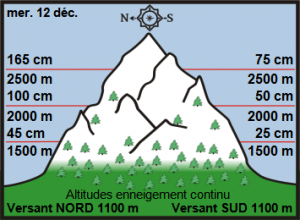 Off-piste snow depths are now much improved following Sunday and Monday’s snowfall. It’s hard to tell exactly how much fresh snow we received because the wild and stormy W to NW winds transported it all around the mountain, piling it up in places and scouring it off altogether in others. We still have quite a few rocks around, but there’s more snow due on Sunday and the early part of next week. We can now ski down to resort level in high-altitude ski areas like Val d’Isere, Tignes, Val Thorens etc.

At altitudes between 1400 and 1800 m, where there was previously no snow, any recent snowfall is currently lying on top of bare ground/grass. It will form the base layer when any new snow falls on top of it. Further up the mountain, between about 1800 and 2600 m, fresh snow has often landed on top of older snow which has been humidified by rain (often crusted).

At higher altitudes above the rain/snow limit of 2400 m or so, the older snow has remained cold, loose and not consolidated. Where slopes have not already purged, there are dangerous buried weak layers of faceted grains (‘sugar snow’ on its way to becoming depth hoar). Temperatures are due to stay cold for at least the next few days.

Added to this, there’s a lot of windslab around above 2000 m. This is particularly unstable on steep slopes shaded from the sun, and on slopes in the lee of the recent strong W to NW winds, (i.e. NE to SE facing slopes) where the underlying layers of snow are often still light and loose. The weight of a skier passing by could be (and has been) enough to trigger a slab avalanche on these steep high-altitude slopes, potentially taking a large amount of snowpack with it.

With these weak layers and windslab snow around, plus very little stabilising effect from skier compaction as it’s still so early in the season, we’ve been taking it easy and being very cautious on big slopes above 30° steepness. By staying mainly on lower angled slopes and skiing one at a time, we’ve been able to find some very high-quality powder snow conditions, largely thanks to recent low temperatures.

The snow’s sometimes been densified by the wind, although still very skiable. We’ve had to avoid some rather nasty patches of icy rain-crust thrown in too. This has been made much easier by recent good visibility, as the areas of rain-crust have been quite easy to spot.

As is often the case on a bluebird powder day after fresh snowfall (Tuesday 11th December) many skiers and boarders rushed out to get their fresh tracks. Some were not so lucky. The weak layer showed its ugly face and we know of at least two accidents. The biggest one was on the Banane, Val d’Isère off piste (E to NE facing) in very often shaded couloir where three skiers were taken for a ride and one was completely buried. Everyone was rescued but one has a severe knee injury. There was also an incident above the ‘Familiale’, Tignes (E facing) where a big slab released and a local rescue had to be performed. 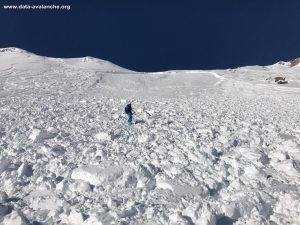 Henry alerted us to the potential dangers on Monday – see our  previous blog post and HAT FB page.

Several avalanches involving skiers occurred on steep slopes around Val d’Isere and other resorts on Tuesday.  See reports (in French) on Data-Avalanche.org and Ledauphine.com. 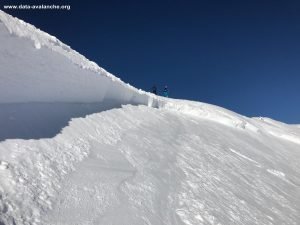 This kept him near the surface of the snow, and enabled rescuers to find and dig him out easily. The avalanche was 500 m long and 60 m wide.

The avalanche risk at the time was estimated at 3 on the European scale of 5. See our descriptions of what all the avalanche danger ratings mean.

Fortunately no one was killed in any of these avalanches.

Contrary to what many people think, the vast majority of avalanche accidents happen on cold  N facing slopes in December, January and February. These avalanches are nearly always triggered by the victims themselves. Only a small minority of avalanches are directly related to rapid warming. Of course, we don’t discount the risk on S’ish slopes and when temperatures rise. However, Henry warns that the widespread belief about avalanche accidents generally happening on heated slopes later in the day and in spring is not only false but very dangerous, for the opposite is true.

More snow on Sunday and Wednesday next week. Not as much as last weekend though. Otherwise sunny and cold with a few clouds

SATURDAY 15 DECEMBER
Still largely sunny and cold.
Morning greyness in the valleys below 800-1000 m will dissipate
Few clouds high in the day.

The night becomes gradually more cloudy, with a few drops or flakes at the end of the night.

A strong NNW wind in the morning at altitude, turns little by little to the WNW and weakens a little.
In the Prealps, the weak wind gradually turns from NE to WSW.
Isotherm 0 ° C: rising to 1600 m during the day, 2400 m at night.

SUNDAY 16 and MONDAY 17
A wave of polar air crosses the country from west to east.
Wind turns to WSW temporarily then to NW more moderate.
Sunday, mostly cloudy; precipitation is widespread in the morning, and persist at night, a little more intense in the afternoon and late at night.
Monday, little sun; morning clouds are present, then weaken in the afternoon, and move away at night.
The isothermal 0 ° C lowers little by little, around 1400 m Monday morning, 1200 m in the evening, then goes up a little.
Snow lower from 900 m.

TUESDAY 18 and WEDNESDAY 19
Anticyclonic weather Tuesday. NW current turns at SW temporarily on Wednesday, then at WNW at night.
Tuesday, more or less sunny; clouds arrive before dark, with precipitation rather late in the night.
Wednesday, a little sun, and some clouds, until the night.
The isotherm 0 ° C rises Tuesday, towards 2400 m in the evening, then lowers, towards 1400 m Wednesday at night.
The snow goes down a little lower.

THURSDAY 20 and FRIDAY 21
The current of WNW then West becomes quite rapid at altitude.
Numerous clouds
The 0 ° C isotherm rises towards 2100 m Friday, then goes down a little.
The snow can rise above 1600 m

Having spoken to people, they do not see the risk right now. The risk is higher than they think.

Hard and thick slabs persist, especially above 2000 m, these are more unstable on less sunny slopes, as well as in areas sheltered from the wind where the recent snow sublayer has remained lighter (especially NE slopes to SE).
ACCIDENTAL RELEASES: A skier may be sufficient to release/trigger a thin or thicker slab, especially above 2000 m and on lee slopes. Above 2600 m, a more or less heavy overload can trigger an avalanche of slab carrying the greater part of the snowpack.

But higher up, the old snow has remained colder on slopes with little exposure to the sun, with weak layer of faceted granular snow.

So it is the cold N NE and NW facing slopes where the greatest risk persists, but you need to keep thinking and applying risk reduction measures on all steep slopes at the moment.

See our HAT Risk Reduction Framework / Checklist and check out our on-line talk which explains it all.